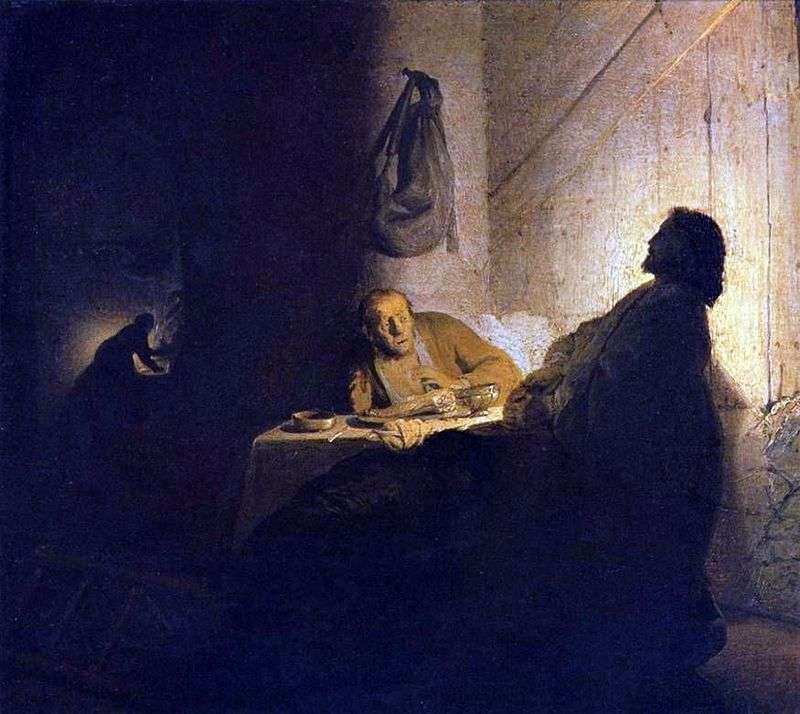 The Biblical Gospel paintings of the early Rembrandt are imbued with a stormy movement, filled with excessive pathos. They were created by the master under the influence of Baroque art, which originated at the beginning of the century in Italy and became widespread throughout Western Europe.

Among the best works of the Leiden period is the painting “Christ and the Disciples at Emmaus”, written by Rembrandt around 1629 and now in a private collection in Paris. It was created based on the famous Gospel legend, which tells about one of the miracles of the resurrected Christ after his death. On a

Reaching the city of Emmaus, the destination of their journey, the travelers sat down to eat. And at that moment, when a stranger with a peculiar gesture broke bread, astonished students recognized him as their teacher. Majestically leaning back in his chair, Christ proudly towers over all those around him. From his big, confidently seated figure blows unshakable strength. The artist interprets the radiance emanating from him as the light from an invisible source, shielded from the spectator by the body of Christ.

Against the background of a disembodied wall, which seems to dissolve in bright light, you especially feel the expressive power of its silhouette. Unlike the hero of the Louvre painting on the same theme, created by Rembrandt nineteen years later, Christ does not require compassion, but admiration. The disciples are overwhelmed and overwhelmed by his power. One, dropping his chair with a crash, fell in frenzy on his knees to his feet. Another one threw up his arms, startled, and drew back. The darkness reigning around seemed to contain something incomprehensible, almost sinister.