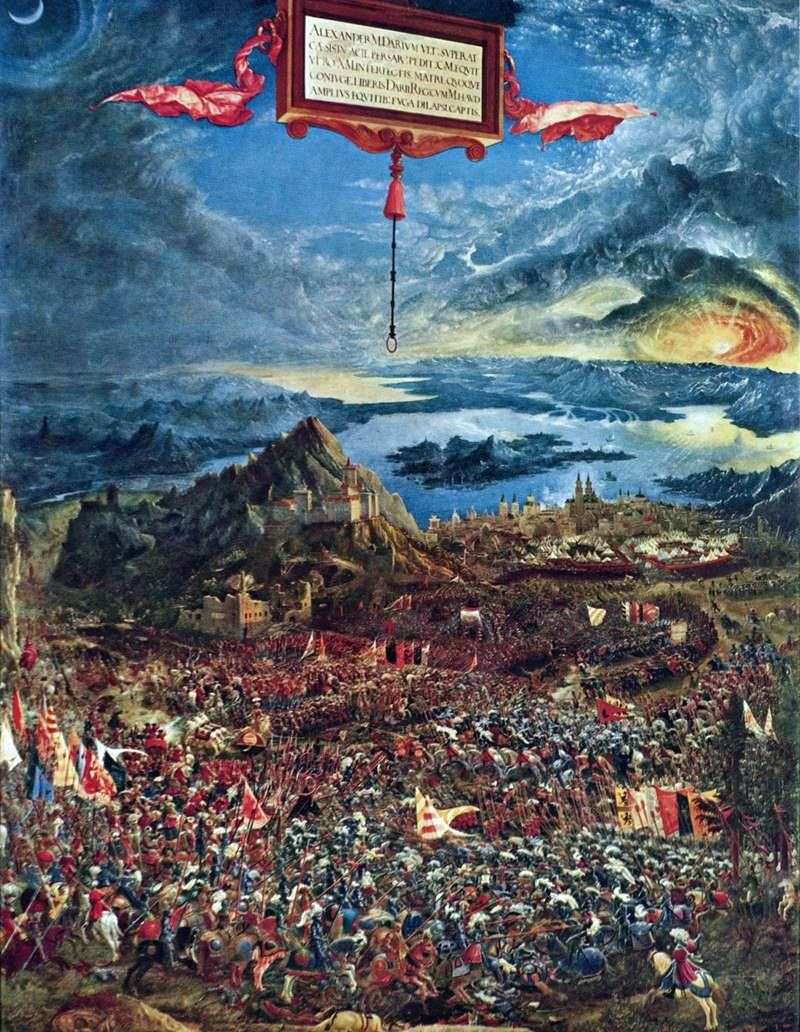 The Bavarian artist Albrecht Altdorfer lived in Regensburg. In 1511, he traveled down the Danube to the south to the Alps. The beauty of those places made a deep impression on him, and he became one of the first painters, depicting landscapes emotionally and expressively, and not just as a convenient background for the picture.

The peak of the painter’s art was the Battle of Issa, written for William IV, Duke of Bavaria. In it, the heavens, the sea and the earth play the same role and only a sign in the sky indicates that this is the same battle in which Alexander of Macedon defeated the Persians on the river Issa in 333 BC. e. According to the armor of soldiers and the architecture of the distant city in the background, this scene might seem to be related to the XVI century.

To create a sense of grandeur of what is happening, Altdorfer painted the battle as if from a bird’s eye view. In front of the spectator a tidal swirl of tiny silhouettes of soldiers, merging into a single mass, opens against the backdrop of a mountain landscape, where the sun dramatically breaks through the clouds, sending the moon away. Alexander fights in the front ranks of soldiers in the thick of the battle, pursuing the Persian king Darius in his chariot.

After the Battle of Issus Alexander showed the same generosity and generosity to the defeated Darius and his family. When his army seized and plundered the camp of the Persians, Alexander respectfully treated the mother, wife and two daughters of Darius. Veronese portrayed Alexander and his friend Hephastion visiting the royal family, in the picture of the Darius Family before Alexander.

Darius’s mother mistakenly accepted the taller Hephastion for his conqueror, but Alexander did not attach importance to the error and, having jested, reassured her, saying that Hephastion is another Alexander. Pursuing Darius, Alexander discovered the Persian king dying from the mortal wound inflicted by his own subjects. When Darius died, Alexander honored his enemy, covering his body with his own cloak.

The illustrious Alexander was convinced that it is better to rule by goodwill than through violence, trying to combine different customs. He married Roxane, who, according to some sources, was the daughter of Darius, and on others – the daughter of the ruler of the Asian lands conquered by him.