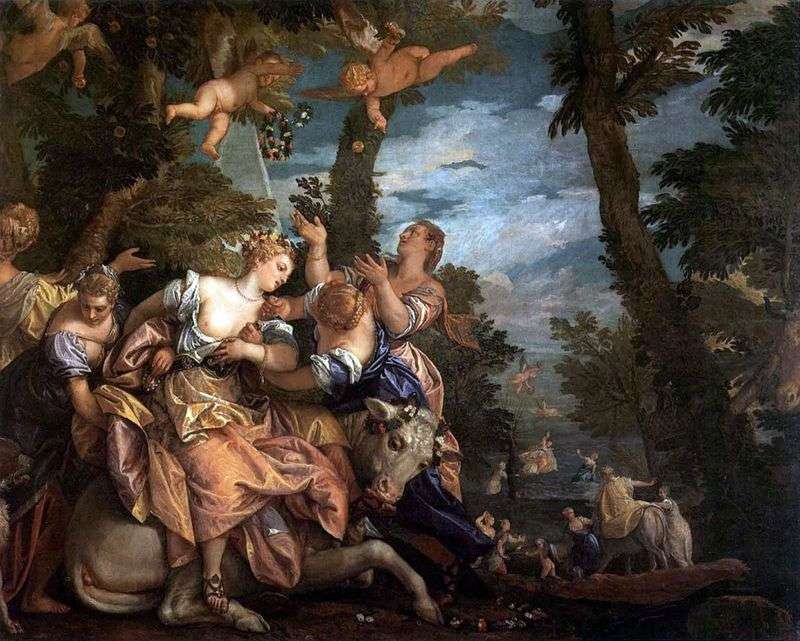 Beautiful daughter of the Phoenician king Agenor was named Europe. Once she dressed in bright clothes and went out with her friends to the beach. There, the girls collected flowers, drove a dance. Europe wanted to get rid of her troubled thoughts. On the shore, she saw Zeus, he was struck by the beauty of the girl and decided to kidnap her. God turned into a bull with golden horns, covered with golden hair, a silver stain burned on his forehead.

The golden bull came leisurely out of the forest. The girls immediately ran up to him, began to iron his golden wool. Such a beautiful and powerful bull they had never seen before. They began to dance round him. Europe, too, stroked and caressed him. An unusual aroma came from the animal. The bull lay down, and Europe laughed at his back, she wanted to ride on such a big good-natured animal. But the bull suddenly jumped up and rushed to the sea.

Europe screamed in terror, she wanted to jump down, but it was too late, the bull was racing with terrible speed, she grabbed his horns so as not to fall. Running to the water, the ox rushed into the waves and swam. And immediately next to him appeared the god of the seas Poseidon on his golden chariot and frolicking Nereids. Poseidon pointed the way to Zeus, waving a trident and calming the waves.

Zeus was swimming for a long time on the sea, he was tired. Finally, in front of it appeared dry land – the island of Crete, the place where the sanctuary of Zeus was. The bull went ashore, Europe jumped off him. And then the bull turned into Zeus and confessed to Europe in love, asked her to become a wife. She agreed and began to live in Crete.