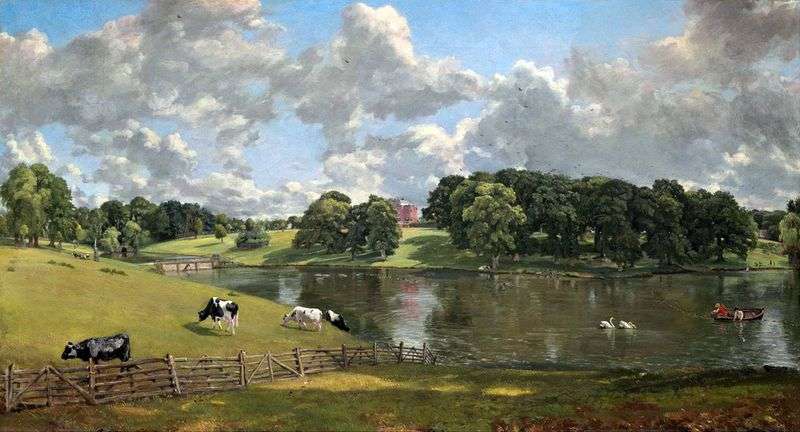 Spending most of the time in nature, Constable almost dissolved in it, loved it to the pain in his heart, and nature opened up the most secret secrets to the artist’s eye. Beauty appeared Constable and in the streaming stream of the stream, and in the cloud-covered sky, and in the sunlit glade.

Closeness to nature allowed Constable in his paintings to abandon the conventions and traditions that predlavnih over his predecessors. He did not recognize academicism in the creative process and was one of the first in painting who began to follow nature and paint landscapes outdoors, not caring about the correctness of the composition and clarity of lines. And it was this that enabled him to apply the strongest aspects of his talent while working on landscape canvases.

Some paintings the painter created in two copies. Some captured what he saw directly the eyes of the artist, others slightly “corrected” taking into account the compositional and color requirements. However, the second option looks very unconvincing against the background of the fresh one breathing fresh.

Despite all this, any Constable landscape can be viewed with equal interest. “Wywenhou Park” was written by the artist in 1816 and represents a sample of early art. But it already discerns the strength and majesty of Constable’s brush. This landscape is a clear indication that Constable absolutely did not attach importance to the composition, depicting what was before his eyes. But it was on the basis of this approach that the principles of a realistic landscape were born.

This following of reality determines the strengths of the picture, one of which is the game of light and air effects. On the other hand, Constable is insured against mistakes, he does not have to foresee and anticipate anything, but we need only not to distort the truth of nature and have a keen eye. Hence the feeling of depth and air space filling the canvas, the illusion of a clear, sunny day.

In the foreground, the coolness of the shadow falling from the tree, under the crown of which the artist stood while working on the landscape, is distinctly felt, and the density of the more frequent forest massif on the right stands out in the background. The central place on the canvas is assigned to the spatially opposite surface of the water and the sky, which in reality create inner unity. Water reflects the sky, and to an inconceivable size, the spatial freedom and variability of the environment visually increase.

Another achievement of Constable is the color palette of the sky. Only two colors, gray and blue, and their numerous tones convey sunlight. Nature itself tells the artist the techniques that give birth to a certain feeling when viewing a picture, you only need to notice them, not to miss them. And here the artist is helped again by the love of the world around him.