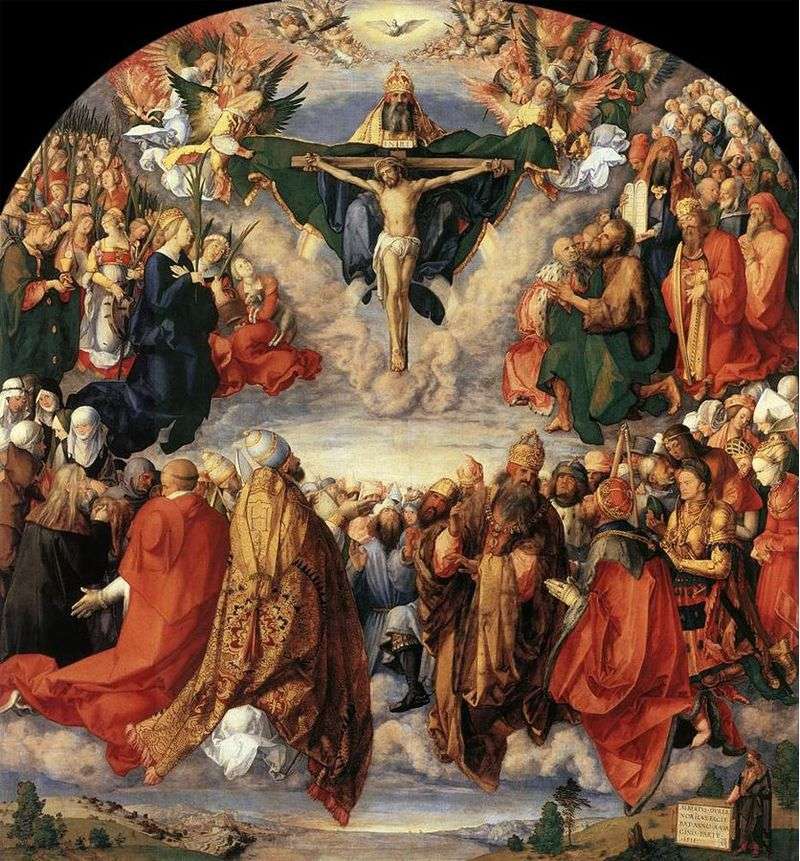 Altar “Adoration of the Holy Trinity” was ordered by Durer Matthias Landauer – Nuremberg, owner of a thriving copper workshop. Landauer built for his money an almshouse for twelve lonely old men – former artisans. Rumor dubbed her the House of Twelve Brothers. The chapel was built under the almshouse. For her, and ordered Landauer altar to the famous artist.

The altar was decided to be made small, without side flaps. This alone was new and unusual. From the side flaps, from a large size Durer refused easily, but could not part with the notion that the altar should be absolutely solemn.

Chapel of the House of the Twelve Brothers was dedicated to the Trinity and all saints. This determined the plot of the picture. He worked on it again very long, the first sketches made back in 1508, and the picture appeared in the chapel only in 1511. It all seemed to him that the work was not yet ready. Durer wrote a picture of the finest layers of tempera, in some places, lightly touching its surface with oil. Where the paint was too shiny, he extinguished the shine, lightly touching the surface with his finger. The picture has forever preserved the traces of these touches.

When Durer at the top of the picture wrote a dove – the incarnation of the Holy Spirit, under him – God the Father, who holds the cross with the crucified Christ, he followed a long tradition. This image of the Trinity was traditional and was called the “Path of Mercy”. But Durer did not just repeat the generally accepted. It was not in his nature, and time imperiously forced to look for new solutions.

Those who approached the painting of Durer, immediately saw – not only holy righteous people, but also laity are lifted to heaven. They form a single crowd. On a swirling cloud that soars in the air like a huge carpet-plane, there is a bishop, knights, rich townspeople, monks and nuns, soldiers, a peasant with a chain. All in festive clothes and all together. So Durer expressed the idea that all the inhabitants of the earth – and those who have money to pay for the forgiveness of sins, and those who do not have them, and the nobles, and the simple, the rich and the poor – are equal before the “Path of Mercy” .

Inhabitants of the House of Twelve Brothers, it was interesting to look at people in the crowd. Moreover, some of them learned. Here is a gray-haired old man of an unusually timid kind. This is the customer of the painting – Matthias Landauer. In the previous altar paintings their customers – donators – often looked important people, confident in themselves, proud of their clothes and coats of arms. In Landauer Dürer emphasized humility in every possible way. Contemplating the picture guessed: The Last Judgment was over The thousand-year kingdom of God began – the realm of justice, equality, universal brotherhood of people.

Below, below the lower layer of the cloud, is the deserted land. On it is a lonely tiny figure. It rests on a stone on which it is written who created the picture and when. This is Durer. He has a sad, pensive face. He is the only one left on earth and who is sad – he portrayed himself as he was for the most part when he worked on “Adoration of the Holy Trinity” and in general at this time of his life. Not only this man who is sad, lonely and detached on the ground, but everything that surrounds him – trees, hills, mountains – seems infinitely remote from the one who looks at the picture. And all the figures that soar in the sky, leaning on a cloud, compared to a tiny person are huge. The spectator involuntarily ceases to notice how small the altar is. Due to the relationship between figures in the sky and a figure on the ground, it seems monumental.

The painting was extraordinarily beautiful. The greatest joy when looking at her was the color. The picture of this, unlike others, who died or were greatly altered during the restoration, was fortunate. It survived and survived the century. Her colors still retain captivating freshness, brightness, strength. In the picture, red, blue, green and gold colors triumphantly sound. A light blue cloak, trembling behind the crucifix, echoes with the dark blue garment of Mary, the deaf blue robes of the prophets, the blue dresses of the laity. In the crowd flare scarlet, carmine – red and scarlet stains of clothes. Musically – joyful polyphony of color evokes joy in the soul of today’s person who sees the picture in the museum hall.