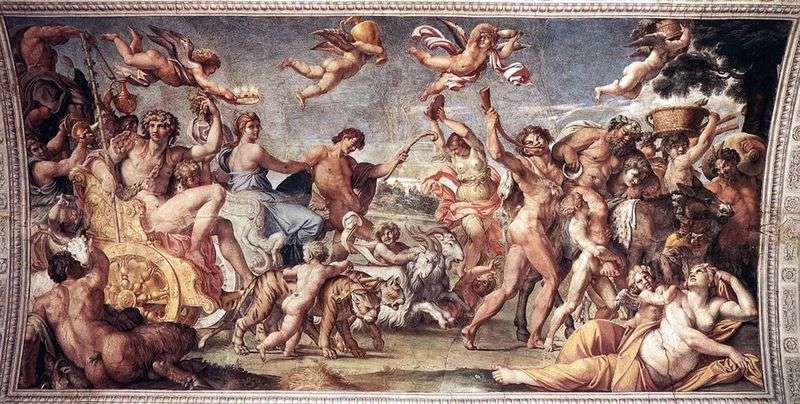 According to the first, Theseus, who loved him Ariadne helped to get out of the labyrinth of the Minotaur, promised to marry her and persuaded her to flee with him, but then left her sleeping on the island of Naxos. Here, Ariadne allegedly found Bacchus, who at first sight fell in love with her. Another version of the myth says that Theseus did not abandon Ariadne, but Bacchus, having inflamed her with passion, himself took it from Theseus and carried to the island of Lemnos, where the wedding was celebrated, so expressively and painstakingly portrayed by Annibale Carracci.

The wedding procession stretches along the arch of the gallery, forming a rhythmic pattern. It is headed by a drunk Silenus. A beautiful young Bacchus is sitting on a chariot drawn by leopards, while Ariadne is being driven by white fine-wool goats. In front of the chariots, the spouses flee, whirling in violent dance, satyrs and maenads.