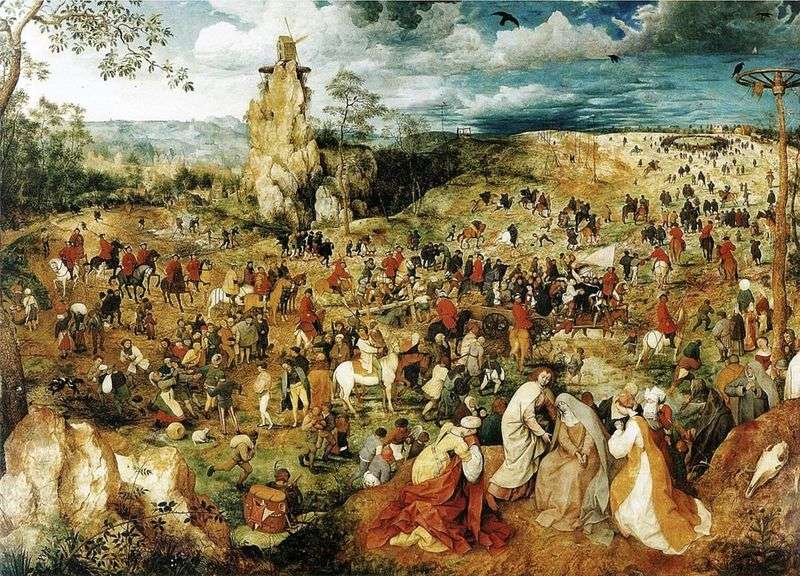 The painting is one of the sixteen canvases by Brueghel the Elder, included in the inventory of the rich Antwerp collector Niklas Yongelink, compiled in 1566. Yongelink, who repeatedly turned to Bruegel, may have acted as the customer and this work.

The works of Brueghel from the collection of Yongelinka passed into the possession of the city authorities of Antwerp in the year of compiling the list. In 1604, the work is mentioned in the Prague collection of the Holy Roman Emperor Rudolf II, from where she was transported to Vienna. From 1809 to 1815, work in other military trophies, requisitioned by Napoleon Bonaparte, was in Paris.

The composition of the work is quite traditional, which is generally uncommon for the artist: Bruegel reproduces the well-known composition scheme for the artistic depiction of the way of Christ to the Execution place, already used by such masters as Brunswick Monogramist and contemporary Bruegel Peter Artsen.

The figure of Christ seems to be lost in a huge cluster of human figures: this Mannerist method is reproduced in both the “Appeal of Saul” and “The Sermon of St. John the Baptist.” In the picture, a deliberate departure from the text of the Bible is allowed: the cross was forced to carry a certain Simon the Cyrenian who happened to meet on the way, but with Brueghel the soldiers pushed Simone away with a pike.