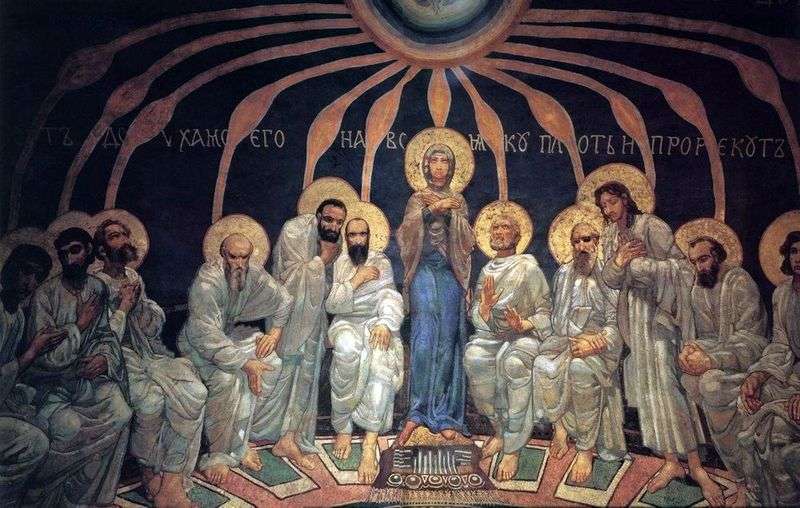 One of the first works of Vrubel. This is a huge fresco “The Descent of the Holy Spirit…”, written by the artist on the boxed roof of the Church of St. Cyril in Kiev.

According to the Gospel tradition, the Apostles were shown the Holy Spirit in the form of a dove, the tongues of flame that came from him “fell asleep on each of them.” After this, the apostles received the gift to speak in all languages and preach the teaching of Christ to all nations. Like other evangelical tales, the plot of Descent had in its church art its iconographic scheme, fixed by centuries of tradition. Vrubel clearly followed the scheme, using probably the ancient miniatures of the Gospels, but he treated the figures in his own way, showing himself as a modern artist.

The twelve sitting apostles are arranged in a semicircle, so that the composition fits into the architectural form of the arch. In the middle stands a very straight figure of the Mother of God standing. The background is blue, the golden rays emanate from the circle with the pigeon figurine, the Apostles’ robes are light, with pearly overflows, creating a glow effect from the inside. The group of apostles, embraced by the general high spiritual uplift, expressing it each in its own way, makes an indelible impression: hands, then tightly clenched, then gustily pressed to the heart, then thoughtfully lowered, then tremblingly touching the hand of the person sitting next to each other.