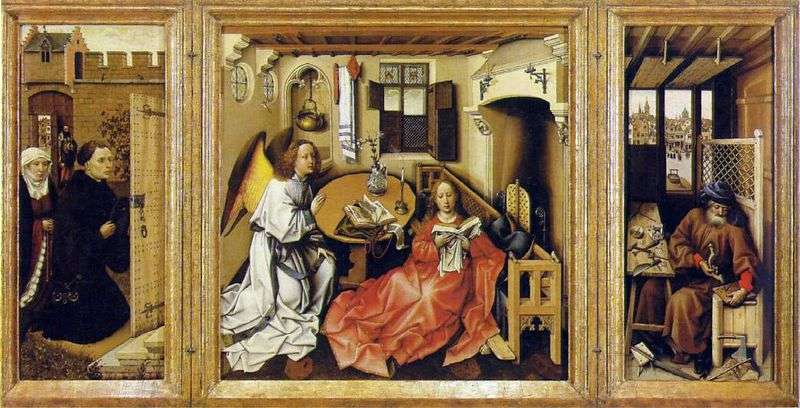 The Altar of Merode, named after the long family that owned it, was first attributed to Rogier van der Weyden, then to the master from Flemal, who was later identified with Robert Kampen. The work shows the features of the art of the late Middle Ages – bright colors, some conventionality of the image and partly flattened space, but it already belongs to the Renaissance: the divine characters, although separated from people, but placed side by side with them, and the Virgin Mary, the archangel Gabriel and Joseph do not look less realistic than donators in the left sash. But the main thing is that at a small size the triptych gives the impression of great. In it, you can feel the majestic spirit that distinguished the paintings of the Renaissance masters.

The triptych is full of details, which are remarkable in themselves: forged candlesticks, the archangel’s patterned belt, and behind the open window, in the space of the city’s landscape, are people, and not only in the street, but also in the shop where silhouettes are guessed in the dark doorways of the doors. Numerous details are therefore written out so carefully that most of them are endowed with a special meaning. For example, the white lilies in the jug symbolize the purity of the Virgin Mary, the open book on the table – her wisdom, the washstand – the water of Baptism, the candle – the light that Christ bears to the world.

Mousetraps on the table and outside the window, set by Joseph, refer to the words of Saint Augustine that “the cross of the Lord is a mousetrap for the devil.” If you carefully examine the altar, you can see how from the round window to the left flies to Mary the tiny figure of the infant Christ carrying the cross. This little triptych briefly describes the whole New Testament story.