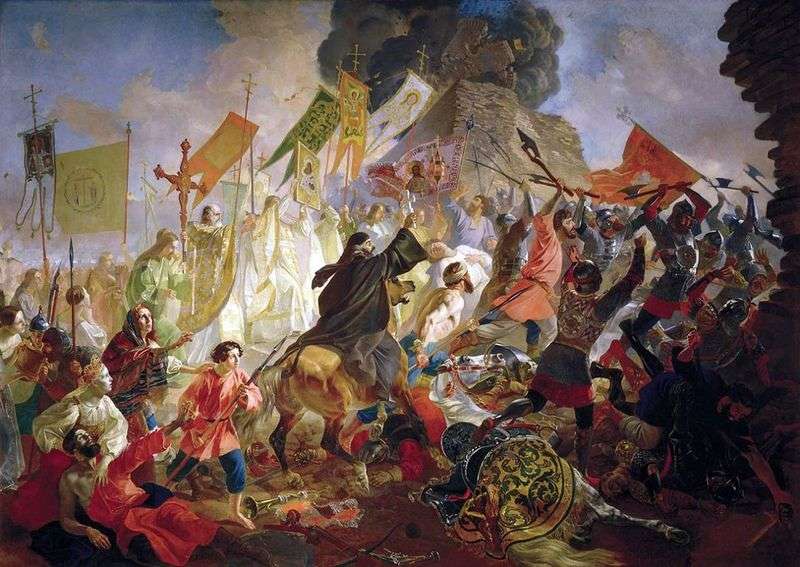 The Imperial Academy of Arts, offering Brullov leadership of the historical class, elevated him to the rank of junior professor. To receive the title of senior professor, he was to write a large picture on the topic approved by the Academy. Probably, an honorary member of many academies of Europe was puzzled by this turn of events.

But, obviously, “The Last Day of Pompeii”, written on its own initiative, was not significant enough to receive the title of senior professor, not to mention the title of academician, which, incidentally, Bryullov never was ever to get. Such was the highest sovereign

of Nicholas I’s respect. Until his death, K. Bryullov will not finish the huge picture “The Siege of Pskov”, which did not fit into the frames set by the history of Karamzin. The false message of the most complicated composition of a huge canvas, pressure, guardianship – all this was hateful to the painter.

In 1581, Batory invaded Pskov. Taking Pskov, he expected to force the government of Ivan IV to agree to difficult conditions of peace, to give Poland the northwestern Russian lands. Batory, apparently, hoped for an easy victory, as he moved to Pskov with a relatively small army and rather weak artillery. He knew that Moscow would not be able to provide substantial assistance to the Pskovites.

In Pskov itself there was a garrison of about 4,500 soldiers and about 12,000 militia. The entire Pskov land was preparing to meet the enemy. Many Pskov peasants left their homes and made their way either to Pskov or to Opochka. Residents of the suburbs of the Red realizing that they can not defend their small fortress, burned it and went to Pskov.