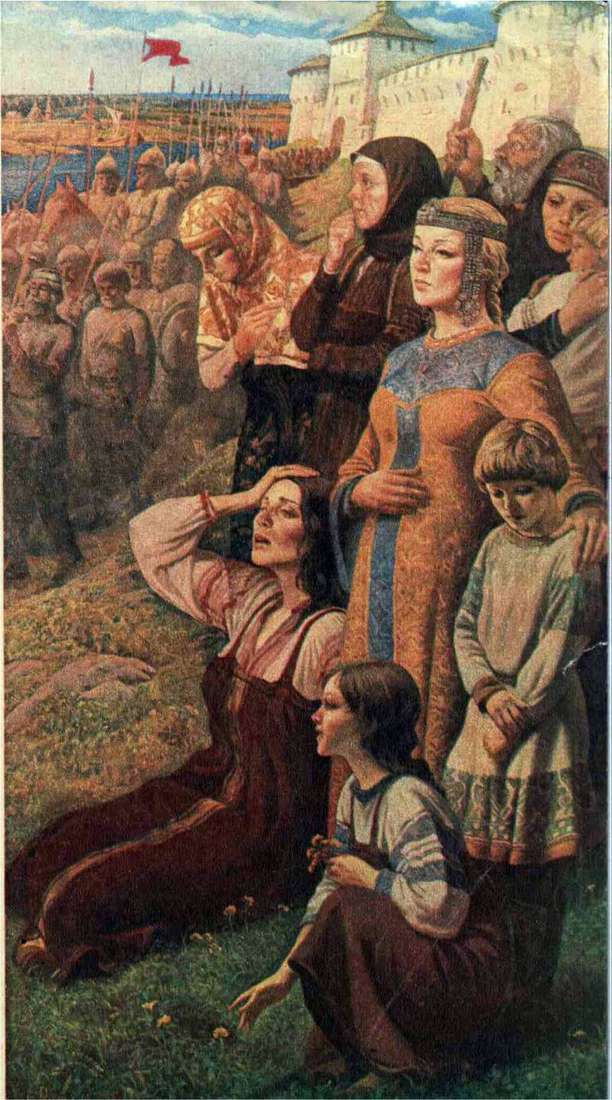 At all times there were wars, and sending the fighters into battle, they escorted the whole city or village. So in the picture “Seeing off the militia” shows farewell to the beloved and dear people who go on a long journey to fight with enemies. Armed men are on the road, along which there are mourners on a hill. It is the mourners, not the warriors, who are the main characters of the painting by Yu. Raksha.

Here in the foreground is a pregnant woman, near which stands her son, and she presses him to her, hugging him by the shoulder. She is dressed in an expensive dress, and her head is decorated with exquisite decoration. It is immediately evident that she is not a commoner, but from a rich family. Her face is full of grief and sorrow, probably she sees off her husband. Near the legs of this woman, right on the ground sits a heartbroken dark-haired woman and her daughter. They are dressed in simple clothes and it seems their family is not rich. A woman also accompanies her husband, but she experiences much more than a woman standing next to her.

Behind them is another woman who holds her son in her arms. She presses him so tightly to her, as if she thinks that when he grows up, he will also be sent to the war and she is most afraid of it. A little further away is an elderly woman accompanying her son. Near it stands a girl praying for the fate of all those who face a tough battle. In this company there is an old man who shouts last words to men.

The trouble brought together all people belonging to different sectors of society. Women with children and old men were left alone and it is not known when the men will return home. And not all will return, and women will mourn the dead close people. They can not do anything, and do not even try to stop someone. Women understand that their husbands and sons go to protect first of all their wives and children, as well as the city from the encroachments of enemies.