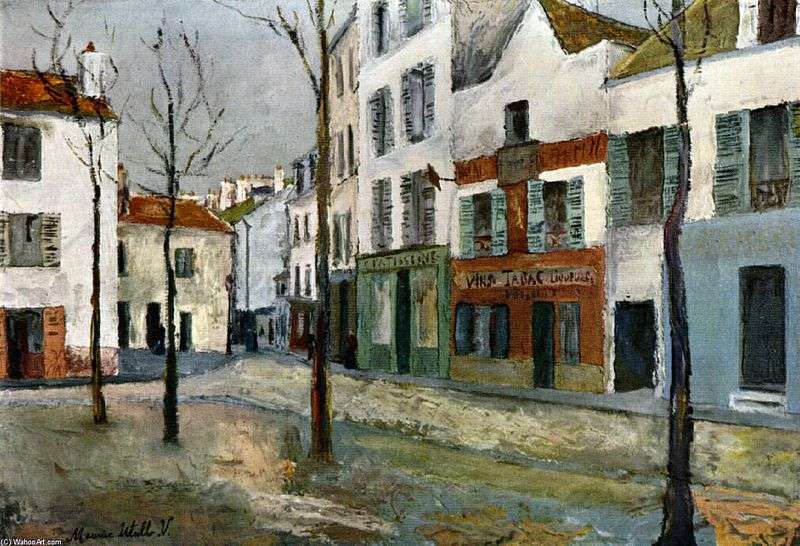 The soft colors of tiled roofs, dirty, cracked walls, bare trees – in the work of Utrillo, his heightened sense of alertness to the world around him, his loneliness, is so expressed. The area of Tertre is surprisingly deserted, the flatness of its architecture in some way turns it into almost a scenery, the volumes seem, imaginary, behind them the space is not guessed.

“Montmartre” translates as “Hill of the Martyrs”, the district received its name in honor of St. Dionysius the Areopagite, the first bishop of Paris. According to legend, it was here that he received martyrdom. In the XVIII century, Montmartre was just a small village. In the XIX century, this beautiful place was discovered by artists and poets. On the steep slopes of Montmartre, it was impossible to drive by wheeled carriages, so it was necessary to climb the hill on foot, along alleys or narrow streets, many of which were giant staircases.

From the top of Montmartre, Paris is visible as in the palm of your hand. Montmartre became the home of the sad artist Maurice Utrillo, whose life and whose work is inseparable from Paris. Our famous “miriskusnik” Alexander Benois once wrote: “When it comes to wander into some provincial backwater or in one of those quarters of Paris, which are more provincial than the most deaf true province, you will involuntarily begin to look at the surrounding” through Utrillo, “and all this miserable, dull will have to be taken in the soul, in it you will find both beauty and poetry. “This is good, this is enrichment.”