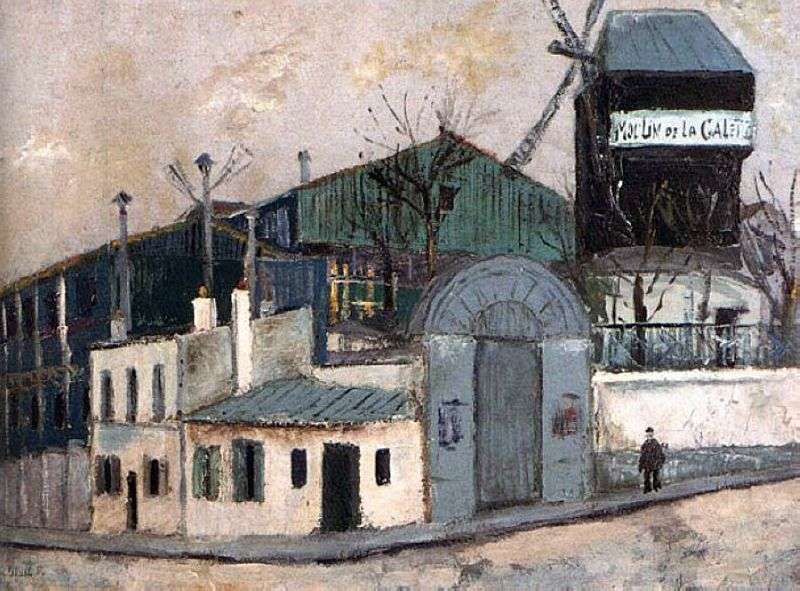 This quiet scene from the life of Montmartre is considered the most famous work of Maurice Utrillo. The picture was in the collection of Paul Petriedes, a Greek by birth, settled in Paris. The dealer of canvases and the owner of the art gallery, Petrides in 1936 concluded with Utrillo contract, according to which he received the exclusive right to exhibit and sell his works. This fact is often referred to when they explain why the great legacy of a prolific artist is scattered throughout the world.

In 1959, Petrides published a five-volume catalog of works by Utrillo, it included 3700 paintings, written in oil, watercolor, gouache, and some drawings. And in 1976 there was a loud trial: Paul Petrides was accused of buying stolen paintings by Utrillo. But since the painter often did not sign his works, and they in turn copied, the proceedings, without clarifying the authenticity of the paintings, only confused the matter.

Maurice de la Galette, created around 1912, refers to his “white period”. On the canvas, the white color predominates, with which the walls of the building and the road are painted. A simple color scheme of the canvas is complemented by blotches of blue tones and a few yellow and red lines. The simplicity of the palette is in harmony with the simplicity of the geometric shapes of the depicted buildings. The naivety of the drawing, the immediacy of perception and the technique of impasto, in which the paint is superimposed in thick layers, are all distinctive features of the “white period” of Utrillo’s creativity.

As always, when he wrote Montmartre, the artist did not attempt to idealize or embellish what he saw. Although we have before us the building of the famous dance hall – a place of cheerful, carefree – the atmosphere of the picture remains melancholic, which is emphasized by bare trees and the lonely figure of a passerby. For his work Utrillo chose an unusual point of view – from the corner.