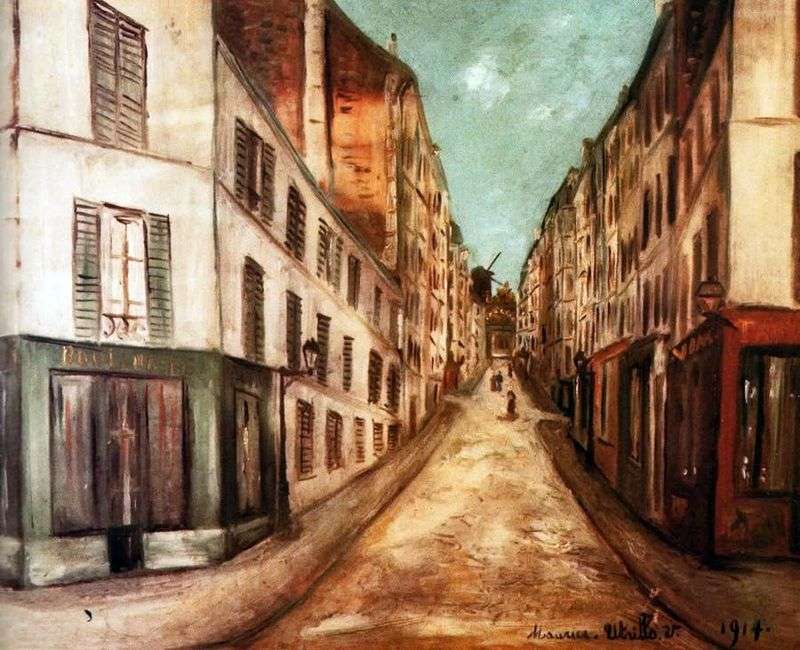 By the time when Utrillo began to write his “Paris Street”, he was already a recognized artist. His paintings were exhibited in Paris and Munich, along with canvases by Cezanne, Picasso, Matisse. In 1912, the first personal exhibition of Utrillo was held in Paris. In those same years, the artist began to travel: he visited England, visited Corsica. Perhaps the latter in many ways led to a change in the entire artistic concept of Utrillo: the “white period” of his work was completed and the “color period”, which was more saturated in color, was completed.

In the painting “Paris Street” we see a bright sky, bright facades of houses, illuminated by golden sunlight. And the street itself looks like a light arch. Figures, located, as always with Utrillo, with his back to the spectator, go to Montmartre. The atmosphere of the picture is filled with peace, and nothing foreshadows the early start of the First World War. Although Utrillo dated this picture, he did not specify the exact street name. And yet it is clear that this street is located in the vicinity of Montmartre – this is eloquently evidenced by the silhouette of the mill of the Moulin Zea la Galette, preserved atop a hill.

In the 1820s, the Debre family, which owned the mill, turned the building into a later famous dance hall, immortalized on the canvases of Renoir, Toulouse-Lautrec and Van Tog. The dance hall Moulin of the Galette business existed until 1966.