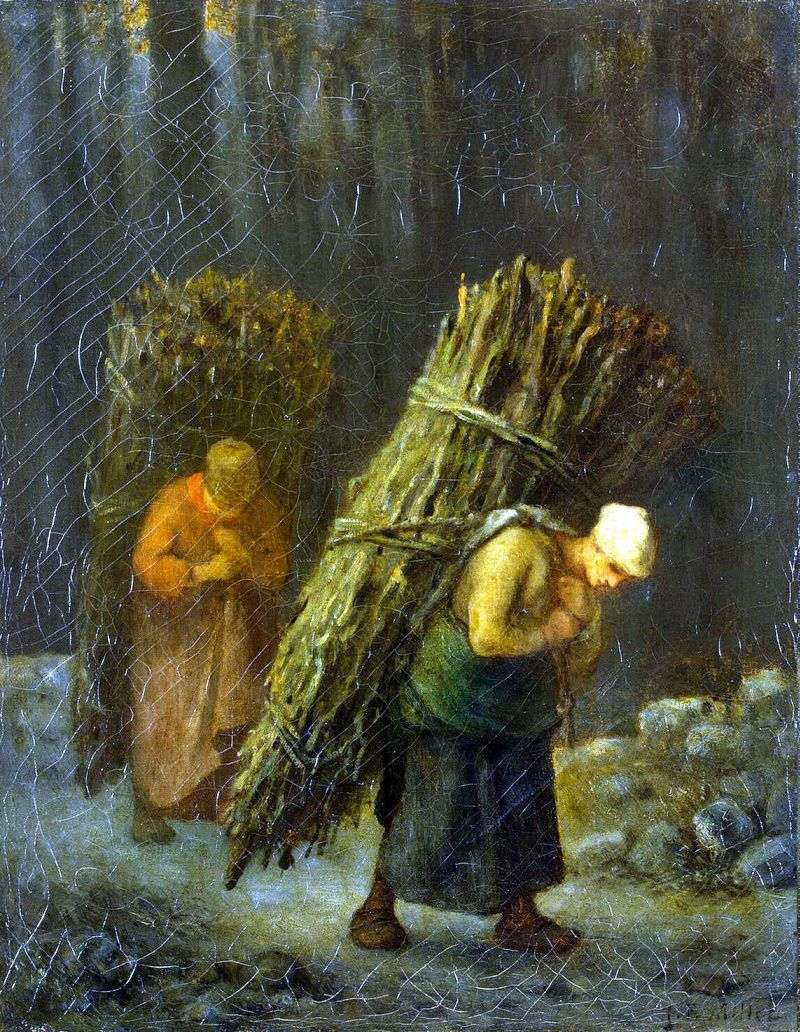 Almost all the work of the French artist Millet is dedicated to the peasants, their work. On his canvases, they are usually absorbed in daily work: grazing herds, spinning wool, churning oil, collecting ears of corn in the field, hoeing the ground. Very often, Millet’s attention is attracted by the figure of a poor man bent under the weight of a bundle of brushwood.

Pictures on this plot are in the Hermitage, the State Museum of Fine Arts. A. S. Pushkin and other meetings. Sometimes Millet translates this sad motive into an allegorical plan, and then a tired figure with a bundle becomes a character from LaFontaine’s fairy tale “The Woodcutter” – Death appears in front of the peasant, whom he called in despair. Obviously, the artist finds deep meaning in this story. There are several especially close topics that intersect with him – a tough struggle for existence, the joylessness of eternal labor, a man among the inhospitable nature.

“I never see the bright side of life,” Mille once wrote to his friend Sansie, “I don’t know where she is, I have never seen her.” These words are involuntarily remembered in front of the Hermitage painting “Peasant Women with Brushwood”. Her deaf tones, as if spreading in the gray twilight depth, determine the minor structure of the color. Two female figures with huge bundles of brushwood slowly wander along the forest path. Monotone repetitions of trunks as if accompanied from the gloom by their slow motion.

The environment is barely marked: uneven vertical trees behind, a heap of stones on the right and another one or two terse details, but the image of the harsh nature grows out of these cursory strokes. And the color, and the movement, and plastic – everything is designed in the same way, concentrated and sorrowful. But these sad notes do not exhaust the idea of the picture. No matter how oppressed female figures look, Millet’s strong and dense painting gives them monumentality. Large forms, a generalized lapidary pattern, a demonstrative awkwardness of slow, but rhythmic and solid movement, eject the slightest tinge of sentimentality from the work – the picture becomes uncompromising and courageous prose. This feeling of power in the depiction of the peasants is invariably characteristic of Millet and gives his works seriousness and significance.

Two centuries after the Lenen brothers, the French peasantry once again finds a deep and sincere artist in the person of Jean-François Millet. These two centuries change a lot – Millet’s heroes lose that calm and confident clarity that distinguishes Lenenov’s characters, their life becomes more dramatic and gloomy. But the firmness and silent strength of the spirit, which these artists of different eras see in the French peasant and which they invest in their works, remains unchanged.

The painting “Peasant Woman with Brushwood” entered the Hermitage in 1922 from the Museum of the Academy of Arts.