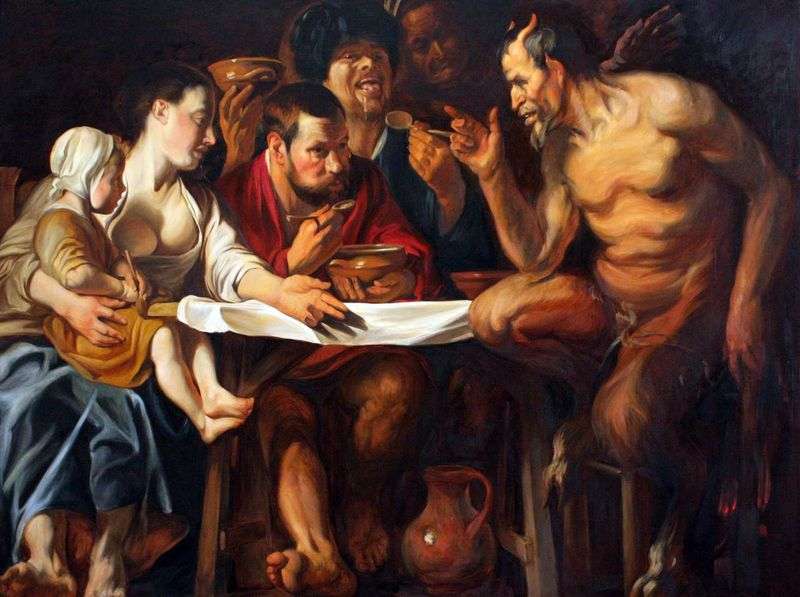 Jakob Jordan belongs to the number of remarkable masters of the Flemish school with its sensual perception of life and optimism inherent in its artists. Jordan was born in the family of a merchant. He studied in Antwerp with painter A. van North and married his daughter.

For the manufacture of tapestries in 1615 Jordan was promoted to the master of the guild of St. Luke, and in 1621 became her dean. In the early works of the artist, the influence of caravagism was affected. In 1620-1630, when the best works of the master were written, the peculiarities of his artistic language were determined: the attachment to healthy, strong, somewhat heavyweight figures, the so-called peasant and burgher types, gravitation to the genre interpretation of plots, juicy, underlined detail image. The artist’s painting is dense, energetic, with a predominance of soft, nuanced warm tones.

The painting “A Satyr Visiting a Peasant” is written on a plot borrowed from the fables of Aesop. The horned goatnose satyr, coming to the peasant, marveled at the duplicity of man: the peasant was blowing on porridge to cool it, and on his hands to warm them. Around this reasoning and unfolding scene, represented on the canvas. Other famous works: “Bean King”. 1638. The Hermitage, St. Petersburg; “Education of Jupiter.” 1620. Picture gallery, Kassel; “Pan and Siringa.” OK. 1625. Museum of Fine Arts, Brussels.