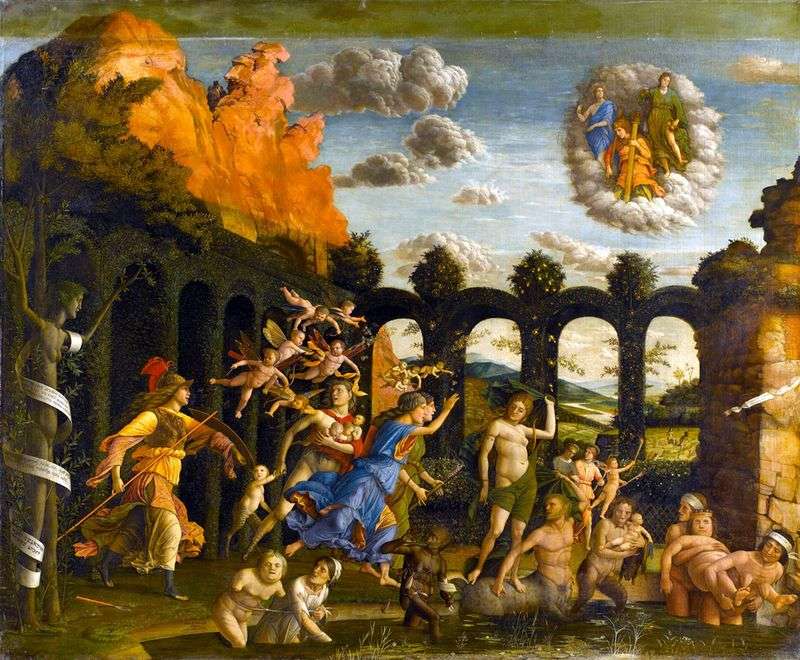 Mantegna painted this canvas for the Duchess of Mantua, likening it to Minerva. In the picture, Pallas rushes in, dispersing everyone in his path and directing his gaze to the sky, where moderation, justice and endurance soar in the clouds.

Behind her back, the female figure turns into a tree, entwined with a scroll asking the Virtues to punish the Vices. On the right, Ingratitude and visually blunt Greed drag dragged ignorant, and behind them satyr and centaur, in which a naked woman embodies sensual love. A monkey with sacks of evil symbolizes Indomitable Hate, Malice, and Deceit, and Laziness leads armless Idleness on a rope.

Women in blue and green attire near Pallada can mean Diana and Chastity. THE BATTLE OF VIRTUES AND VALUES. Opposite vices and virtues are often shown to those who fight, such as Belief with Idolatry, Modesty with Pride, and Chastity with Lust, or they are placed opposite each other in niches, such as in the cycle of Giotto’s narrative frescoes. Since the Renaissance, Minerva, Apollo, Diana and Mercury have always been on the side of Virtues, and Venus and Cupid have been on the side of Vices.