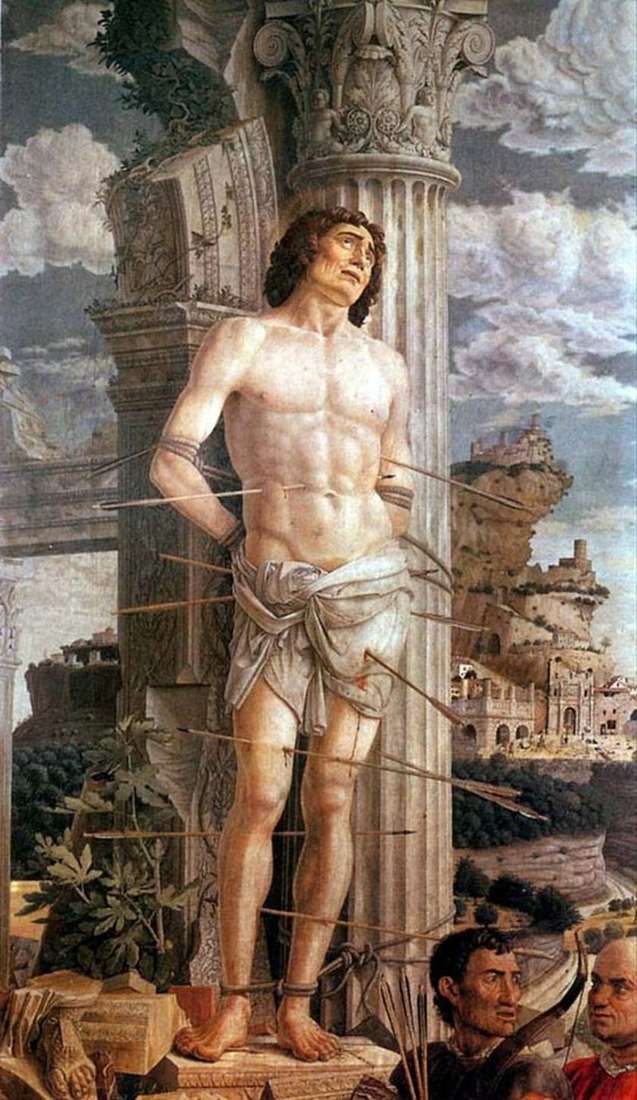 Among the magnificent paintings on the spiritual theme, Andrea Mantegna has a series of three paintings created at different times under the same name – “Saint Sebastian”. The most famous of them is the second work of 1480, now kept in the Louvre.

Sebastian – now canonized saint, and earlier – in the interval of III-IV centuries – a soldier of the legion and a follower of Christian doctrine. The reigning emperor Diocletian was against Jesus and his followers, cruelly persecuted them. Learning that a preacher of a new faith appeared among his legionnaires, he ordered his comrades to shoot the apostate with arrows to death.

As the story conveys, the Christian survived, his wife left, or another supporter of Christ. The man continued the work of preaching, which led to the re-execution. This time he was stoned to death and threw his body into the gutter of the city. According to the angel’s instructions, the body was found by Christian Lukina, who buried him in the catacombs.

The image of the martyrdom of Sebastian is a fairly common religious story with painters. But everyone sees and shows to the audience the different facets of the spiritual feat of man and his significance for history.

The whole lower part of the body is cut by arrows of archers. Legs are tied to a collapsing antique statue. This is a symbolic symbol – the fall of Greco-Roman idols, the departure into non-existence of paganism. Near the “statue” of the martyr are visible the remains of a completely destroyed marble hero. The person being killed is strong, his eyes are directed to heaven with faith, his face is wrinkled as evidence of wisdom and knowledge.

Mantegna paid a lot of attention to details in the image of the body, architecture, background. The amazing detail of the description retreats only before the brilliantly embodied idea of the formation of Christianity through the shedding of the blood of martyrs.