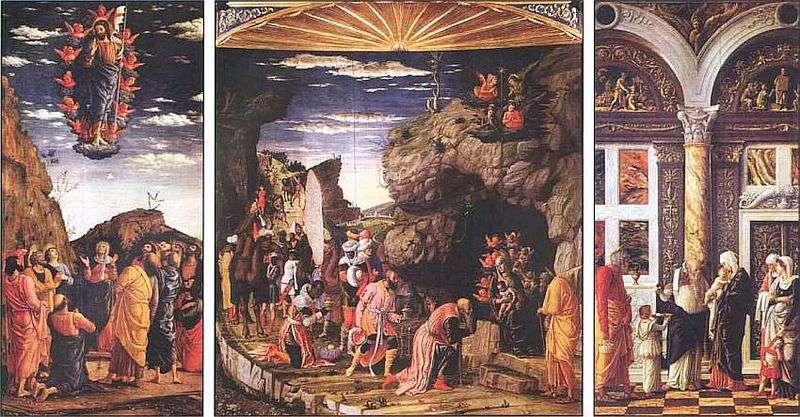 Andrea Mantegna is an artist, in whose paintings already several decades before the High Renaissance began, the approaching steps of this powerful art were felt. The triptych was commissioned by the margrave Ludoviko Gonzaga for a chapel at his family palace in Mantua. The miniature letter of the altar image, the abundance of wondrous details characteristic of the art of the Early Renaissance, are combined with the power and monumentality that were already inherent in the next stage of Italian painting.

As a result, the small, picturesque altar produces the same impression as the wall paintings of Mantegna in the Gonzaga Palace. And at the same time, the triptych I want to consider, like a jewel from a box. In the central part of the artist presented the scene of the worship of the Magi: among the so beloved rocky landscape moves a long procession of people in luxurious robes. They go to worship the Baby, who is sitting on Mary’s lap. Angels hover around.

The dry and bright letter of Mantegna makes the image literally shine, also due to the special “air” in the pictures – completely transparent, thinned, which is only high in the mountains. Therefore, in the world created by the artist, you can see everything: a path in the distance, and the light castle to which she leads, and camel wool, and tough grasses, and thin golden threads that carry clothes. At the same time, the stage can be imagined as a full-length choir. Mantegna knew this and, in order to enhance the effect of the monumentality of the figure, he wrote it on a concave surface.

In the “Circumcision” scene, the artist painstakingly wrote out a wall ornament, compositions in lunettes – “Isaac’s Sacrifice” and “Moses Handing the Tablets of the Testament to the People”, a basket with doves in Joseph’s hand, a tray with accessories for cutting, which the boy stretches to the high priest. The image of little John the Baptist, who sucks his finger, holding a bitten bagel in his other hand, is pathetic. All this detailed scene would be suitable for a large mural. And only in the third composition – “Ascension” – there are almost no carefully depicted details, it is more austere and more powerful, it again has a stony landscape, and even the cloud on which Christ stands looks like carved out of marble. But, as before, the feelings of the characters are subtly conveyed: the astonishment and hope of Mary and the apostles,