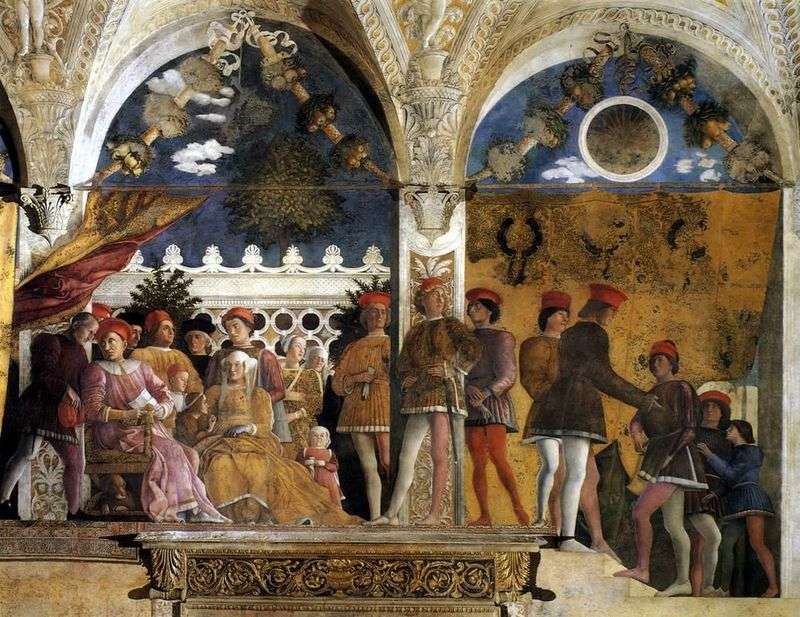 The cycle of frescoes of Mantegna in the Palazzo Ducale is considered the pinnacle of the work of the famous master of the Padua school of painting. The camera degli Spozi is translated as “The Hall of the Bride and Groom” – Rudolfi, an art historian of the 17th century, called this room, suggesting that this room served as a bedroom for the Gonzaga couple who ordered the painting by Andrea Mantegna.

However, it is now accepted that this room was intended for audiences, and not at all for sleeping. Despite this, the story has kept the erroneous name suggested by the authoritative Rudolfi. Customers wanted the artist to depict the most significant milestones of their family here, diluting them with scenes from the life of the court.

It turned out a very magnificent multi-figure work of art that can be read like a book. The central point in the work is the image of the scene of the arrival of Cardinal Francesco Gonzaga in Mantua and his meeting with Father Louis. The highest achievement of Mantegna is the miraculous transformation of the low ceiling of a room into a high dome, in accordance with the laws of perspective, which have just been applied in painting.