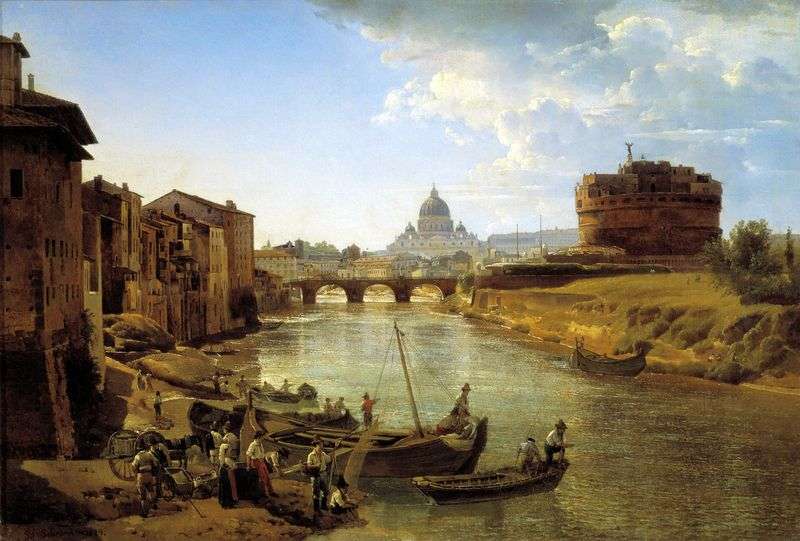 Landscape painting arose in Russian art much later than the portrait and the historical picture. Only in the last quarter of the XVIII century among Russian artists a group of masters was singled out, for whom the image of nature became the main specialty. In an unusually short time, not exceeding two or three decades, landscape painting has reached a high artistic level in Russia and has taken a full place among other genres of art.

It is remarkable that realistic tendencies with great force were already manifested in the first generation of Russian landscape painters. But at the early stage of the development of landscape painting, at the end of the eighteenth century, the desire for a truthful recreation of nature was still hampered by a whole system of conditional devices and rules that go back to the general principles of the art of classicism. The image of nature was allowed by classical aesthetics only in the form of a “historical” or decorative landscape, and the artist’s task was not so much the reproduction of reality as its idealization. The landscape was not written from life, but, using preliminary sketches, “composed” in the workshop, arbitrarily grouping a number of depictive motifs – mountains, waterfalls, groves, ruins, etc., subordinated to a decorative task.

On the basis of classical samples, a scheme for constructing a landscape was developed, in the main features being the following: the species itself was usually depicted in the background, in the background, and the near plans were constructed like the theatrical scenes that framed the image; The space was clearly divided into three parallel planes, the first of which was designated brown, the second green and the third, the furthest, bluish; Transitions from one plan to another were planned with the help of a linear perspective, which reduces objects, which become milestones in constructing spatial depth. Lively impressions of nature were subject to this scheme, and the realistic aspirations of Russian artists found a way out only in the truthful reproduction of details and particulars of the landscape with the general convention of the image as a whole.

The first steps towards the liberation of landscape painting from conventional schemes were made at the turn of the 18th and 19th centuries by the artists M. Ivanov and F. Alekseev. Completion of their case fell to the share of the remarkable painter Sylvester Shchedrin, who in the twenties of the XIX century raised Russian landscape painting to an unprecedented height. Shchedrin passed the academic school under the direct supervision of M. Ivanov and during the youthful years experienced a strong influence of F. Alekseev’s painting. Shchedrin’s early work, still based on the classical tradition as a whole, reflected the shifts towards realism that characterize the landscape painting of his predecessors. Already in the early period of his artistic activity, he moved away from the “composed” landscapes and turned to the direct reproduction of real nature. But only in the 1820s, after a deep creative breakthrough,

To improve his specialty Shchedrin in 1818 was sent to Italy as a pensioner of the Academy of Arts. Rome was considered in those years a world art center. Artists, in particular landscape painters, came here from all over Europe. They were attracted by the glorious past of Italy, its great art and captivating nature. Representatives of all the picturesque directions and schools could be met here. In the motley artistic environment of the then Rome there was a climate of international rivalry, intense picturesque searches, a sharp struggle between the new and the old; the reactionary foundations of the classics were confronted with the advanced tendencies of romanticism, the emerging realism opposed the traditional forms of art. In this complex, full of contradictions creative atmosphere Shchedrin was able to preserve the independence and national identity of his work. Shchedrin immediately took a prominent place in the Roman colony of artists.

He quickly achieved recognition in the widest circles of the artistic community. Only a few could compete with him on the strength of talent and skill level. Teachers – in the truest sense of the word – he did not find in the older generation, or among peers. But close contact with new trends in landscape painting was fruitful for Shchedrin. He eagerly absorbed abundant and diverse artistic impressions, and the demanding critical processing of them served as a powerful impetus to the development of his work. Together with the best landscape painters of his time, he strove for a true transfer of nature, for the direct immediacy of her perception, for studying it on the nature, but he pursued these goals in his own unique way. Mastering the realistic method of image, Shchedrin came from separate, analytically studied details of the landscape to a new pictorial generalization. The decorative convention of academic landscapes, he contrasted irreproachably with the exact reproduction of the material objectivity of the world.

He peered at the Coliseum and the ruins of old Rome, as a portraitist peers into the face of the person he portrays. This overcoming of decorativeness already represented a decisive step forward on the road to realism. More fruitful and significant were the shifts in the attitude towards reality, in the content and interpretation of the image of nature. The painting “Old Rome” was, in effect, the last work written by Shchedrin with a look at the former academic manner. From ancient memories he turned to living modernity and already in the following year, 1825, he painted the painting “New Rome”, which became, as it were, a program of his further artistic pursuits. Henceforth Shchedrin attracts no longer the grandeur of the past, not the harsh beauty of classical ruins, but the poetry of reality, the charm of nature,

The traditional image of Rome as the “eternal city”, the homeland of the famous monuments of art and the witness of the former glory of the great people, gives way to a new image – the image of modern Rome and its ordinary, today’s life, with fishing boats on the Tiber and lively groups of townspeople in the foreground of the picture. Having overcome the tradition of the “heroic landscape” and the understanding of nature, elaborated in the Academy of Arts, as an occasion for historical recollections, turning to the living, contemporary reality and real nature, Shchedrin also overcame the conventional academic scheme for the artistic solution of the landscape theme. The new content of the image led to a new pictorial form. “New Rome” marks a turning point in the development of Shchedrin’s work. Since the middle of the 1820s, the period of his best talent has reached its peak.

All the most valuable in his heritage is created precisely in these years. Two cities were written by Sylvester Shchedrin in Italy: Rome and Naples. They embody the Italian life and as the best, the main time of the artist’s own existence and as his own theme in art. The landscapes of Rome are an introduction to history, to a high artistic tradition, the landscapes of Naples are an introduction to real life, motley, careless and reckless. “New Rome” is not a pictorial illustration of world history, but a modern city is beautiful because it combines naturally the great past and present with all its everyday life. The city, which has its own unique life, in which one whole is composed of people and their dwellings, the waters of the Tiber and boats on the shore, the arcades of the bridge and the castle’s bulk, the clouds in the sky and the dome of St. Petra is far away.

In painting, all this is conveyed by the unity of illumination and tonal unity of color. According to the contemporary, “This work was so popular in Rome that many people wanted to have it… The artist… had to repeat this kind eight times, but loving art and nature, did not want to be a copy of his own work.” Each time he changed the air and tone paintings and thus produced eight paintings, one and the same kind representing, equally original. “