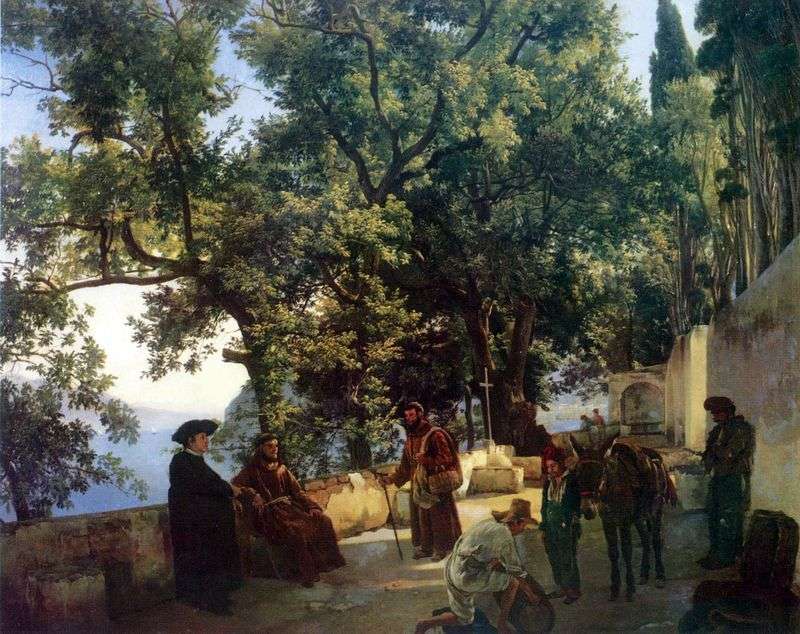 Sylvester Shchedrin was born in St. Petersburg, in an artistic family. His father is a famous sculptor, rector of the Academy of Arts, uncle – a landscape painter, who for almost thirty years headed the class of landscape painting. Sylvester Shchedrin graduated from the Academy of Arts and was sent as her pensioner to Italy, where he won wide fame with his work. Russian and foreign lovers were arguing for the right to acquire his landscapes. In Russia, the artist was not able to return: he died in Italy, having lived there for a little more than ten years.

Shchedrin wrote numerous views of Naples and its environs. Especially loved by the artist Sorrento, where he was attracted by a quiet harbor, picturesque steep banks, rocky grottoes by the sea, overgrown with shady greenery terraces. In Sorrento, the short life of the artist was cut short, and now it is possible to see his grave. The picture “Terrace on the beach” for a long time had no specific definition of the depicted terrain. Find it helped find a find among the drawings made by some unknown artist in the 1840s.

Among the sketches of species in the vicinity of Sorrento were sketches of the same terrace with a note, specifying its location – the Place Capuccini. The terrace is located high above the sea. Immersed in a deep shadow or illuminated by the bright sun, it is full of a bizarre play of light. Under the tall trees, monks in brown cassocks, belted with ropes, hid themselves from the heat, a fat pater, a ragamuffer leaning against the wall and pulling the cap over his eyes, the mule driver and other passers-by. The picture is permeated with light and saturated with air, the linear perspective is reserved only for the foreground, the distant perspective is transmitted exclusively by pictorial means.

No, it seems, no transition from the dark figure of the priest, leaning on the parapet, to the blue horizons on the horizon; However, the depth of the distance separating them is perfectly felt by the viewer, and a huge space opens up in the opening of the foliage. With a few quick strokes, pink roofs and white walls of Meta village are barely outlined in the distance. Nature in Shchedrin’s paintings is always sunny, clear and calm. In contrast to many writers and artists of the Romantic era, Shchedrin did not seek to sing the storms and the struggle of the elements.

He preferred nature serenely calm and classically clear. At the same time, nature in his paintings is always animated and warmed by the presence of man. The people of Shchedrin’s landscapes are not a smart crowd of gentlemen, but the Italian commoners in their picturesque rags are the natural inhabitants of all the Shchedrin terraces, harbors and embankments. Shchedrin was an innovator in art. While his predecessors, masters of the classic landscape, confined themselves to full-scale sketches of pencil and based on them in the studio composed paintings, Shchedrin painted his sketches directly from nature. One of the types of the artist repeated eight times, changing the air and tone of the picture. Shchedrin is rightly considered the closest predecessor of the masters of open-air painting of the second half of the XIX century.