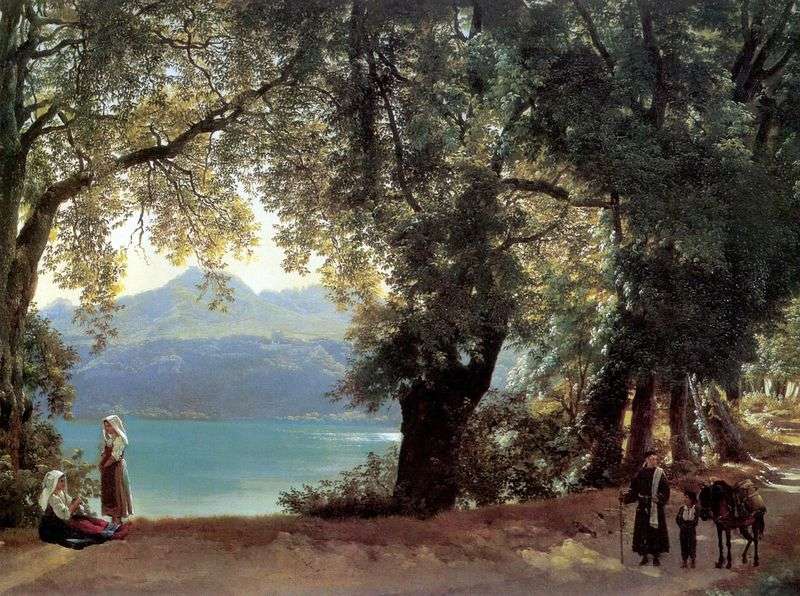 Among the works of a happy time, a prominent place is occupied by the painting “View of Lake Nemi in the environs of Rome,” written, apparently, around 1825. In this small canvas, belonging to the best creations of Russian landscape painting, the main features of Shchedrin’s new art system appear with full clarity. “The view of Lake Nemi” is alien to the deliberate effects that make up the very essence of the academic landscape. In the Shchedrin landscape there are neither classical groves, nor waterfalls, nor majestic ruins; idealization is replaced by a living and truthful reconstruction of the image of nature.

The basis of the new method is not the “composition” of the landscape, but the direct and accurate observation of nature. A narrow path, lined with old trees, winds along the shore and takes the viewer’s view into the depths of the picture. In the foreground are several figures: two peasant women are talking on the beach, a monk is walking, and the boy-driver is leading the donkey. Further quiet light waters of the lake are visible; in the depths, closing the horizon, a tall, forested mountain is turning blue. Soft diffused light floods the picture, through the branches of trees on the sandy path sunlight flashes, the water shines with silver in the sun, and a transparent air veil envelops near and far objects.

Realistic mastery of space is one of Shchedrin’s main achievements in this picture. There is already no backstage, no milestones marking the depth. The linear perspective was replaced by an aerial one. True, the three traditional plans still persist in the picture, but the road going deep into the road binds them together and makes the space continuous. The artist is no longer satisfied with the truthful reproduction of individual details; he achieves the integrity of the overall impression and the organic unity of all elements that make up the landscape.

The transmission of light and air, the unity of illumination, connecting objects and spatial plans, is the main means by which the picture acquires this integrity. The picturesque system, developed by Shchedrin on the basis of studying nature in the open air, opens a new page in the history of the landscape. It is not surprising that the Russian master’s innovation was not immediately appreciated and caused protests of conservative art criticism. It seemed to the ideologists of academic art that Shchedrin “adhered to slavish imitation of nature, avoiding deviations even in favor of the elegant.”

Indeed, the artist deliberately refused to conditional and fictitious effects, which were considered “graceful” in circles close to the Academy of Arts. But, of course, he was very far from passive copying of nature. His painting not only captures the real face of the shores of Lake Nemi, but also reveals with deep and genuine penetration the poetry of Italian nature, its sunny tranquility and bright, pacified harmony. The lyrical experience of nature brings Shchedrin closer to romantics. The image of solar Italy, created in his paintings, finds a parallel in the poetry of Batiushkov, Baratynsky and the young Tyutchev. In their romantic worldview, realistic features clearly appear. Together with the poets of his generation Shchedrin created a living and integral image of nature,