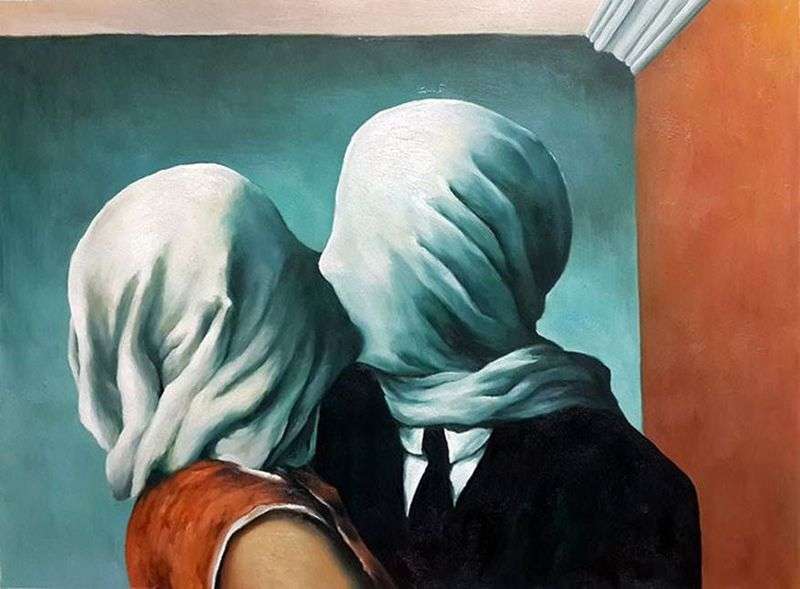 The painting “Lovers” of the Belgian surrealist painter Rene Magritte is known to the viewer in two versions. On the first canvas, a man and a woman, whose heads are wrapped in a white cloth, merged into a kiss, and on the other they “look” at the viewer. The work is very symbolic and harbors a deep meaning. Some critics interpret this plot as a reflection of the human inability to fully disclose the true nature of their relationship, even with the closest people…

There are two main versions of the creation of the painting “Lovers”. According to the most common of them, the cause of birth in the artist’s mind of such unusual images was his childhood trauma associated with the tragic death of the mother.

Magritte was a teenager when his mother drowned. Being young and beautiful, she committed suicide by jumping from the bridge into the river. When the body of the deceased was found, her head was wrapped in cloth. Most likely, the woman specifically covered her face so as not to look disfigured after death.

In accordance with the second, less popular version, the origin of this disturbing image is the result of Magritte’s fascination with “phantomas” – the dark hero of the thriller. The identity of the phantom has never been revealed. He always appeared in films, being disguised with a cloth or stocking on his head.

The author portrayed the characters in a fit of passion. This is evidenced by the folds of cloth thrown over the head. The passion that erupted between two people really leads to blinding. It deprives the ability to think objectively and notice the obvious. There is such an interesting proposition about this picture: Magritte did not just close his eyes to lovers, he shook their heads, thus realizing the metaphor – “lost their head from love”. Another very interesting detail of the picture – a kiss through the canvas. Perhaps the artist depicted unreal love, not able to give pleasure from the contact of bodies, their penetration into each other? Perhaps the canvas depicts sinful passion, which shyly covers itself up and, as it were, is protected by white bedspreads? Or maybe the artist tried in this way to pass judgment on human feelings – they say, even a strong love is not able to give the opportunity to comprehend the truth? Even truly in love people remain blind – they do not see anything around themselves, they do not see each other’s faces and they never fully know each other?

The picture can be interpreted more optimistically: love itself is so self-sufficient that it does not need vision. Lovers of people do not necessarily see each other and the world around them. They are able to feel the intimacy even through a double layer of fabric thrown over. In this way, the artist conveys to us the idea that true feelings do not know any material barriers. 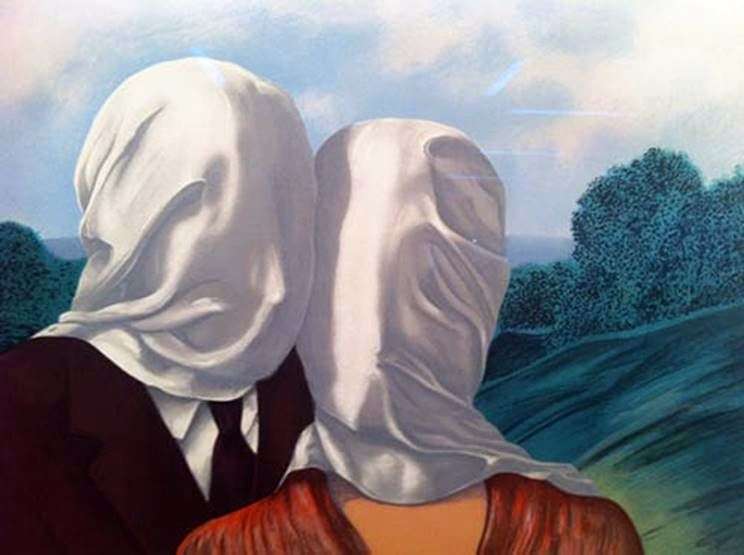 These curious guesses are confirmed by the plot of the second picture. A careful comparison can be seen a number of differences on the canvases, which is not limited to the postures of lovers. First, the artist changed the background: the action of the first painting takes place in an enclosed space, and we observe the second pair of lovers in the open air. Secondly, the author has dressed the characters in other clothes. Thirdly, the general mood of the picture has changed: the concentrated tension of the first scene was replaced by the relaxing pacification of the second.

The artist seems to be trying to say that passion has nothing to do with it. Now completely calm characters do not look at each other, but at the viewer and the world around them. But we still can not see their faces, but they are still “blind”! Perhaps this is the apotheosis of love? A person who has experienced a real feeling opens true inner vision, which allows him to feel deeply this world, and not to contemplate his miserable likeness accessible to public viewing? And the obstacles in the form of cloths thrown over the heroes, as well as articles of clothing, words, walls, artificial sounds and paints are no longer able to prevent them from enjoying the true beauty of this world? Perhaps the discovery of this inspiring truth is the most valuable reward for unraveling the pictorial puzzle of Magritte, an artist who knew much more about life,

Magritte admitted that he considers his main goal to make the viewer think. That is why his paintings often resemble rebuses. But unlike conventional puzzles, it is almost impossible to solve them, because they raise questions about the very essence of being.