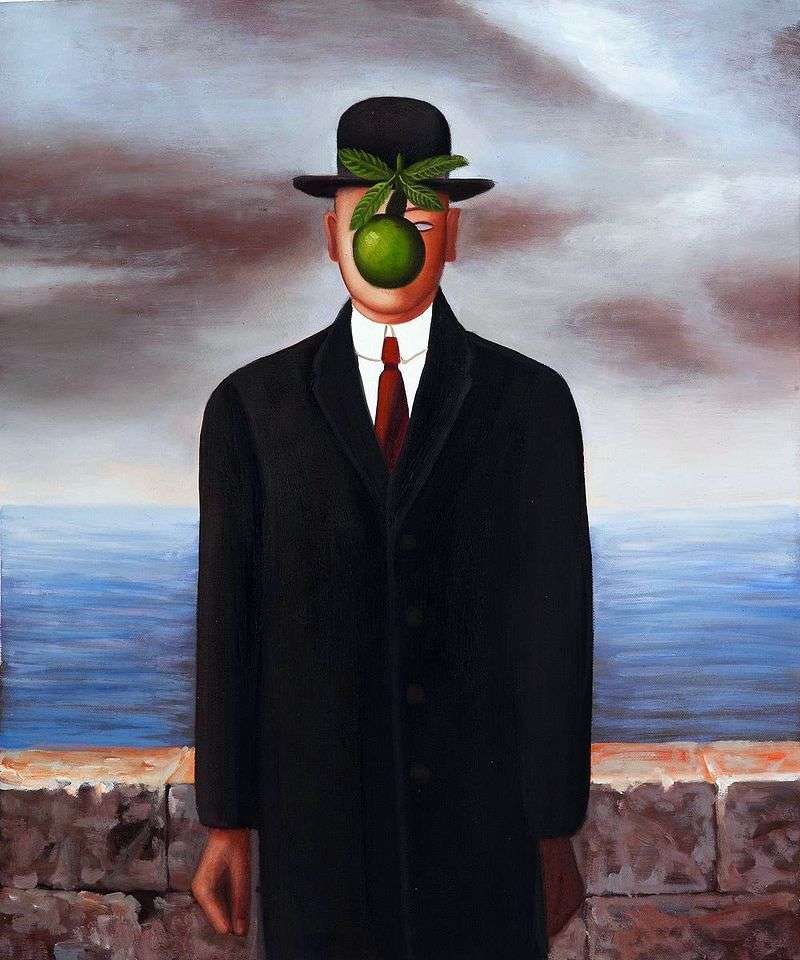 The most famous among the works of René Magritte – a picture-riddle “Son of man.” Written in 1964, it immediately captured the minds of the external simplicity and extreme depth of content.

Cling attention and catchy image of a man in business clothes – a black coat over a shirt with a tie and hat bowler on his head.

Paradoxical object – green apple blocking a person’s face. The most common pattern is interpreted as a symbolic image of the modern man – a businessman who still is a descendant of the first man – Adam, and therefore subject to the temptations and sinful actions; they like the apple of knowledge overlap existing view of the world visible and invisible things. However, Magritte, most likely, would like to give the right to interpret his painting to each of us individually. After all, so it is: everyone looking at the “Son of Man” reveals his vision of life, personal philosophy.

Proceedings of Magritte’s not just a bright beautiful posters, in addition, they carry a philosophical puzzle. Show the existence of a hidden meaning, the essence of things lurking in the world – that is the task surrealist Rene. Moreover, the artist refused to identify themselves in this direction. Surrealism was based on psychoanalytic science. Images of Magritte are not scientific, but more mystical and impel not dry intellectual debates, and creative imagination and the search for the truth of being.

“Son of man” – is lost individuality stranger who looks into that which is hidden from view. Background – the wall, sea and sky in the clouds – nothing to distract his attention.

Interestingly, it was written as a self-portrait painting. Now the appearance of Mr. Anonymous in bowler hat and jacket at times perceived separately from the author of the picture. “Son of man” successfully entered into modern popular culture and continues to inspire people to question, far from the everyday hustle and bustle.