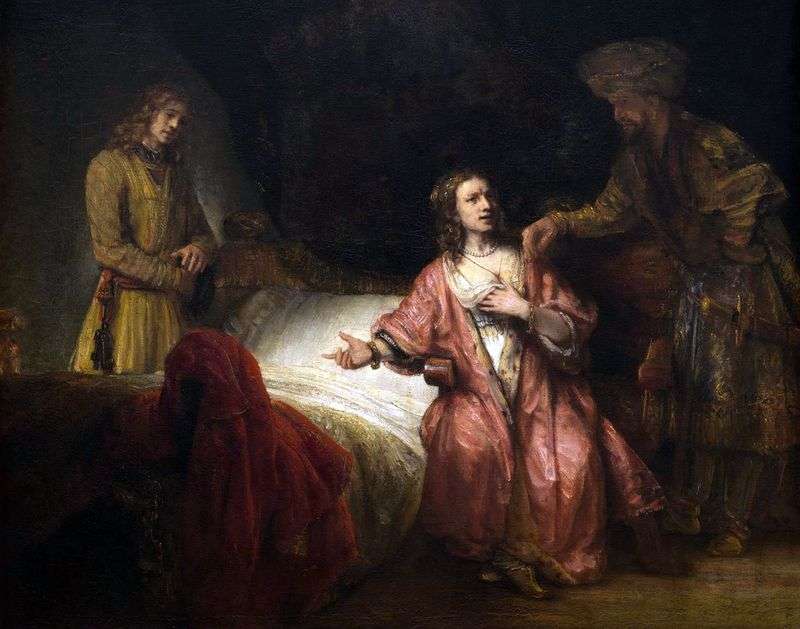 Painting by the Dutch artist Rembrandt van Rijn “The accusation of Joseph.” The size of the painting is 106 x 98 cm, oil on canvas. The fuller title of the painting is “Potiphar’s Wife Blaming Joseph”. The story of the biblical patriarch Joseph is told in Genesis. Even in the parental home of Jacob and Rachel, their beloved son Joseph acts as a dreamer.

Joseph’s father distinguishes him from his brothers, and, jealous of his special position and beautiful clothes, they sell Joseph into slavery to caravans going to Egypt. In Egypt, Joseph serves as a slave to the rich nobleman

Potiphar, the head of the Pharaoh’s bodyguards. Potiphar entrusts Joseph with his whole house, but Potiphar’s wife encroaches on his chastity and Joseph escapes, leaving his clothes in the hands of a woman. Potiphar’s wife, falling in love with Joseph and failing to achieve reciprocity, accuses him of rape.

In the prison where Joseph falls, the baker and the tsar’s baker are with him. Joseph interprets their dreams, according to which the bread baker will be executed, and the baker will be forgiven after three days. The prophecy of Joseph is being fulfilled, and the butler recalls him when the Egyptian priests find it difficult to interpret the pharaoh’s dream of seven fat cows devoured by seven lean, seven good spikelets devoured by lean. Joseph, summoned from prison, interprets a dream as a premonition that after the next seven years of a good harvest, seven years of ill harvest will come. He advises Pharaoh to appoint a trustee to create stocks for the duration of the famine.

Pharaoh appoints Joseph as a confidant, favors him with his ring, gives him the Egyptian name, and in wives, Egyptian Asnef, the daughter of a priest from Heliopolis. The image of Joseph was greatly developed in aggadic legends, in Christianity, where Joseph’s chastity and innocent suffering are regarded as foreshadowing the sacrifice of Christ, and Islam. This story about the accusation of Joseph of raping the wife of the rich Egyptian Potifar is one of the most popular Old Testament scenes in European art.

In biblical scenes Rembrandt is more closely associated with the text than in works on mythological themes, in images on the plots of the Old Testament or the real story, he develops his narrative, based on historical sources, from the text, in images on the plots of the New Testament Rembrandt, following the artistic tradition rather moving away from the text. But in any case, he acts in an ingenious way freely: “There is no willfulness in it, the scale for Rembrandt always remains history and the artistic task set for him by his time.”