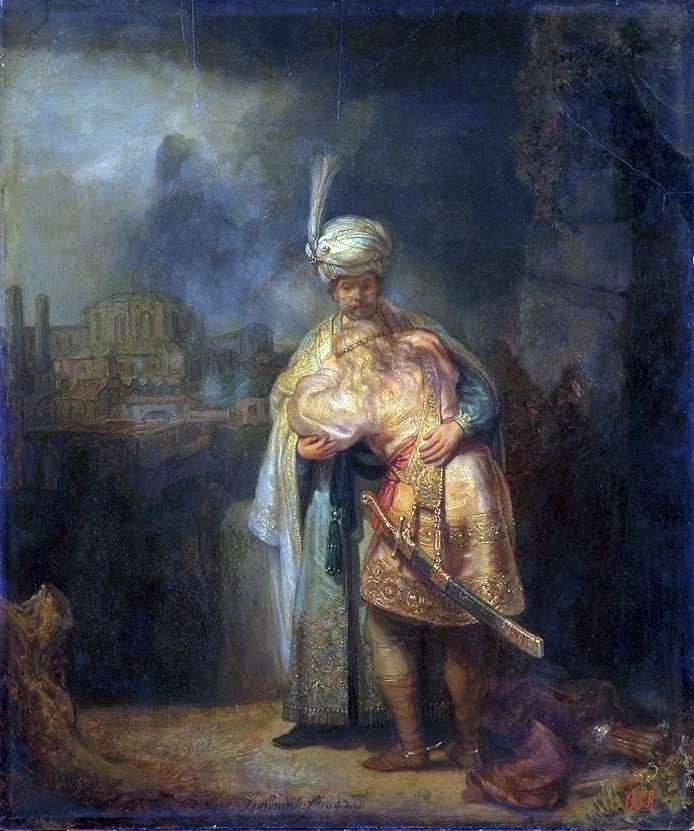 The painting of the Dutch artist Rembrandt van Rijn “David and Jonathan” or “David’s Farewell to Jonathan”. The size of the picture is 73 x 62 cm, wood, oil. The latest research on the example of historical works clearly showed that Rembrandt, when working on a particular topic, always carefully thought over its content, starting from the source, regardless of where the artist’s search for the plot originates – in mental images determined by mood, in a particular text, often interpreted in connection with a personal life situation.

Iconographic analysis allows you to set the prevailing option. If Rembrandt does not adhere to the text literally, he turns to the well-known to him often from his own collection of artistic tradition, from which he adopts his subjects; it happens that he corrects the taken samples on the basis of the text, or, following the tradition, deviates from the text.

Rembrandt tends to enrich a particular scene with additional motifs, thus giving it the character of a story; on the other hand, the method of singling out and erecting separate elements of the narration into an independent history is also characteristic. Researchers of the Dutch artist’s work associate the idea of the painting by Rembrandt “David and Jonathan” with the biblical story from the First Book of Kingdoms.

The king of Judah Saul sought to destroy the young David, fearing that he would take his throne. Warned by his friend, Prince Jonathan, the winner of Goliath David says goodbye to Jonathan at the Azayl stone. Jonathan is stern and restrained, his face is sorrowful. David in despair falls to the chest of his friend, he is inconsolable. Probably, the heavy events in Rembrandt’s personal life, the death of Saskia, contributed to the writing of this mournful picture.

But it was at this time in the works of Rembrandt comes the time of maturity. The dramatic scenes of the early paintings of the artist are replaced by the poetization of everyday life: the plots of the lyrical plan become dominant, such as in the paintings “David and Jonathan” and “The Holy Family”, in which the depth of human senses conquers with surprisingly thin and strong embodiment. It would seem that in simple everyday scenes, in the mean and accurately found gestures and movements, the artist reveals the complexity of psychic life, the flow of thoughts of the characters.