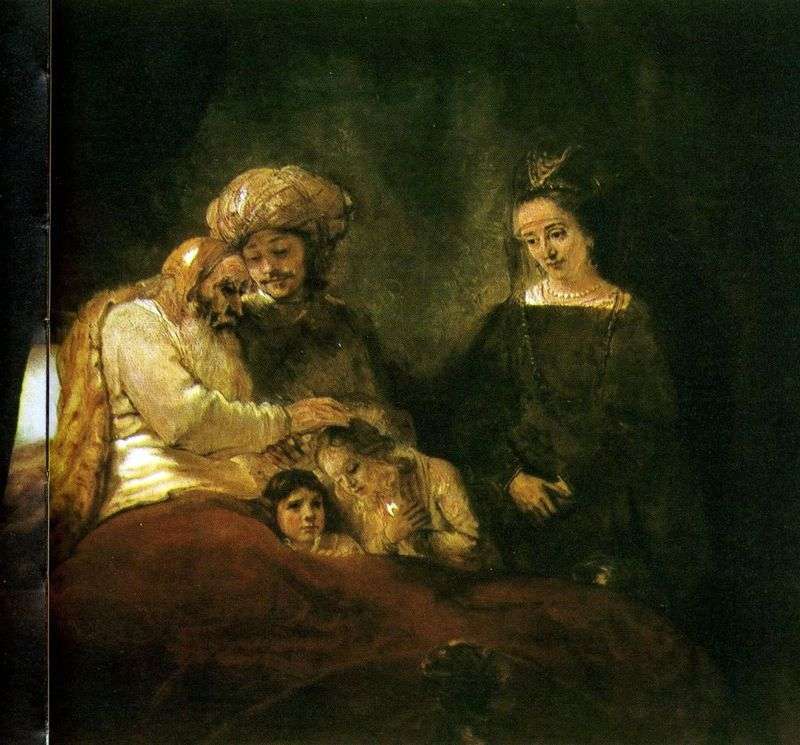 Painting of the Dutch painter Rembrandt van Rijn “Jacob’s Blessing”. The size of the painting is 173 x 209 cm, oil on canvas. The full name of the painting is “Jacob blesses the sons of Joseph Manasseh and Ephraim.” The solemnity of a significant Old Testament event – the blessing of the grandchildren by Jacob – is expressed by the strict composition and bright colors of the picture.

The painting technique by Rembrandt, which paints with broad goose strokes, then finishes them with glazes, gives the scene additional depth and seriousness. Each of the characters is engulfed in deep religious feelings. Jacob, the venerable patriarch, is characterized with restrained, majestic dignity, while Joseph and his wife watch him with humility and pious reverence.

The magnificent red color of the velvet in the foreground and the sparkling gold turban in the depth provide visual clarity on the whole to the rigorous presentation of the plot. Most of the works in the works of Rembrandt reflect his ability to penetrate into human nature. Outwardly less dramatic than the works of his contemporary Peter Paul Rubens, Rembrandt’s extensive legacy reflects the restrained emotions and piety of the Calvinist Holland.

Dutch painter Rembrandt van Rijn in this picture, based on the biblical story, wrote portraits of Amsterdam burghers Peter Scririus, Willem Schreiver, Vendela de Graff and their sons. The question of Rembrandt’s Christianity, its specific ideology, often neglected by its historical and social significance, often arises. Of course, his ideas about man in comparison with the counter-reformational and renaissance-life pictorial world of Rubens develop on the basis of strict Protestant dogmas.

The doctrine of the Calvinistic “state” church is undoubtedly the starting point of Rembrandt’s early thinking, but the constant development of his work, the choice of themes, motives, artistic convictions prove the spiritual relationship with the anti-dogmatic, simple-evangelical teaching of the Mennonites who reject military service and the execution of government officials who trust the “poor” spirit, “not” wise and learned, “the heart and feeling of the individual, not the institution.