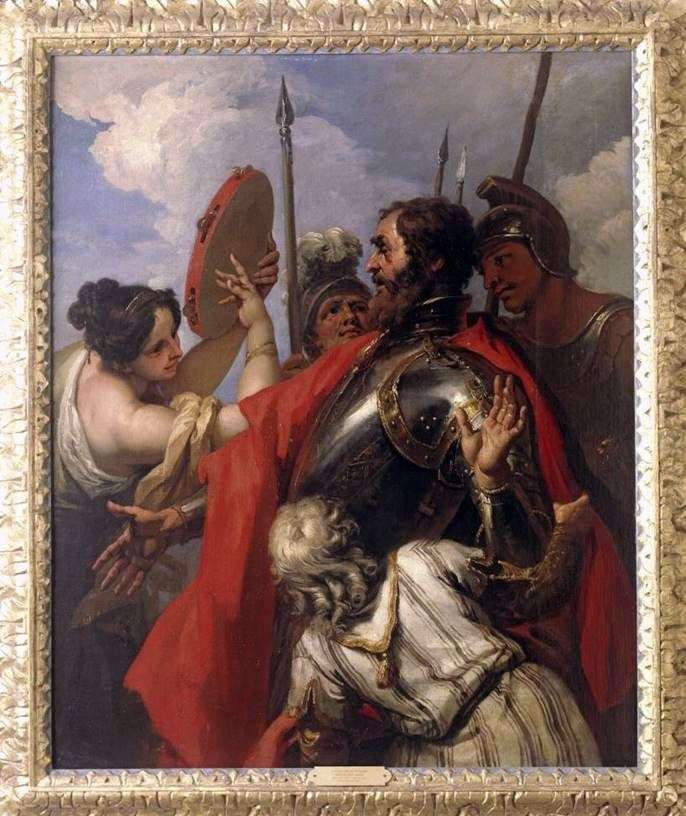 Painting by Italian artist Sebastiano Ricci “Jephthah and his daughter”. The size of the painting is 182 x 130 cm, oil on canvas. This picture of Sebastiano Ricci is dedicated to the biblical story of the Old Testament about Jephthah, which sacrificed his daughter. Jephthah is one of the most famous judges of Israel. His mother was a harlot from Gilead, in the trans-Jordanian knee, Manasseh.

Deprived of his inheritance by his free brothers, Jephthah retired to the desert and there became a leader of a gang of robbers. But in the heart of Jephthah the fire of patriotism did not go out, and when

the Israeli people, exhausted by the ruinous yoke of the Ammonites, appealed to him for help in fighting these predators, Jephthah responded to this prayer, became the head of the assembled militia and utterly defeated the enemy.

With this victory is associated with the story of this Jephthah before the campaign of the oath, the victim of which was his only daughter, the bride, which he, in fulfillment of his oath, had to bring a burnt offering. Interpreters refer to this fact differently: some understand it literally, in the sense of human sacrifice, others believe that the daughter of Jephthah remained in her virginity and was dedicated to serving the Tabernacle. Jephthah was an Israeli judge for six years and died alone; there was not even a memory of his burial place in the progeny.

The life story of Jephthah is set forth in the book of Judges. However, the story of Jephthah, who sacrificed his daughter, is set forth in the Bible with such mysterious uncertainty that the fact of sacrifice can be interpreted differently, and most of the newest researchers tend to explain that Jephthah’s daughter was simply dedicated to serving God at Tabernacle. In any case, the Mosaic law clearly prohibits human sacrifice as an “abomination” before the Lord.