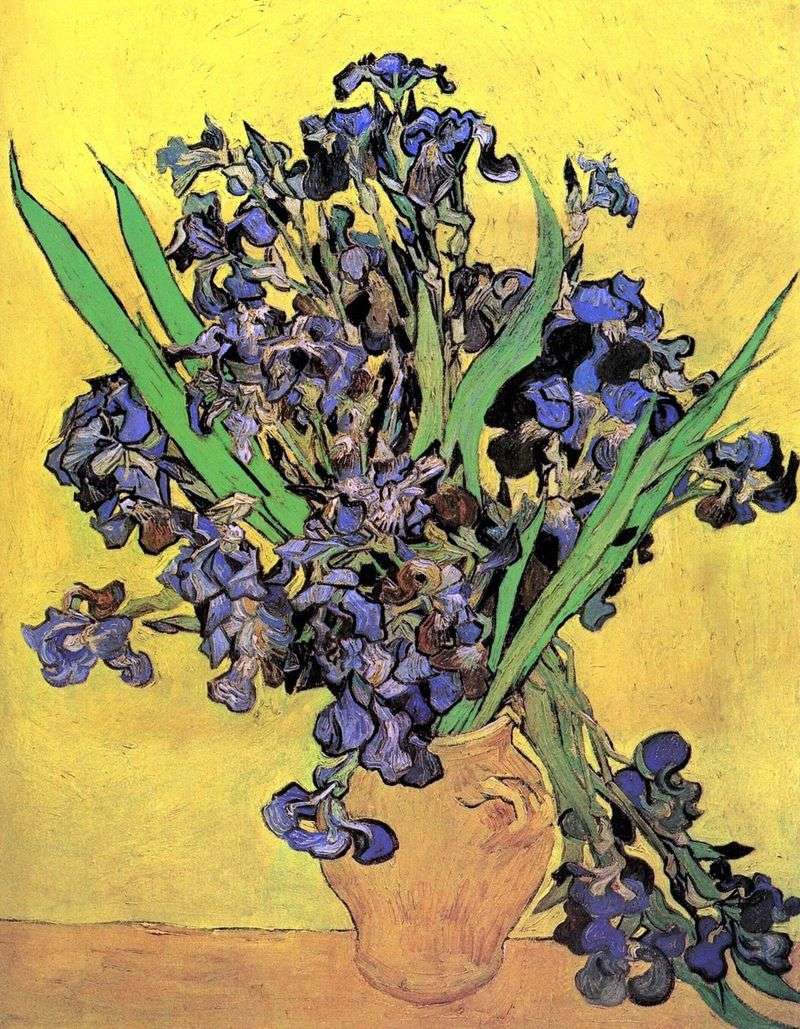 For the still life of Van Gogh “Irises” is characterized by a contrasting image of yellow and blue flowers, their special color combination. Irises have a soft rounded shape, echoing in part with the smooth unsharp shape of the vase. The image of irises resembles a wavy colorful stream of color that recreates the atmosphere of dynamics, flow, transfusion of the coloristic energy of the canvas. At the same time, an impression of fragility, airiness, and “porosity” of the figure is born.

The background, the drawing of the vase and the plane of the table are drawn with the artist applying warm, soft colors. The background plan of the picture is filled with a single color without excessive detailing and ornamentation. At the same time, the true power of color, its fullness with light, warms, penetrating into many objects of the surrounding world and giving air visibility and color.

The use of shades of yellow builds a special colorful rhythm, builds a reality full of harmony and correct features. The color selection differs saturation, openness, without crushing into many shades. The author gives a greater preference to the strength of the black contour in the drawing of bright blue petals, fresh sheets of iris in a vase.

The image of iris flowers was especially carefully worked out. Strokes of white color outline the depth and expressiveness of shadows, the volume and tenderness of complex inflorescences. The predominance of blue hues in the image of flowers is not of a total nature. Rather, we can say that the blue color of irises is tonally softened by various combinations of ocher, yellow and blue.

Writing the picture of the vase is slightly shifted to the right, while this artistic solution is reinforced by excessive “liveliness” and the pomp of the bouquet in the left part of the canvas. The far plan has a one-color local solution and is colored in yellow, which looks quite simple, ascetic, coloristically monosyllabic. The movements of the artist’s brush follow in their movement the outlines of objects, molding the very “fabric” of the represented thing and performing the function of form-building. Shadow drawing is not written out, laws of classical construction of chiaroscuro are minimized.

However, “Irises” amaze with the brightness and dynamism of the visual series, the expressiveness of colors, inside of which there is a deep color and linear drawing power. Vincent Van Gogh’s canvases are different from many works of academic classical painting, and besides, from the majority of works of impressionistic art. Despite this, his work is full of vitality. The main feature of Van Gogh’s creative method is brightness, sometimes aggressiveness, colors, quivering of lines, a feeling of “rattling” of the image created in the picture. In the works of Van Gogh, life is irresistible, like a stream of consciousness or a turbulent restless swarm of thoughts, ideas whose beauty needs to be felt and appreciated.