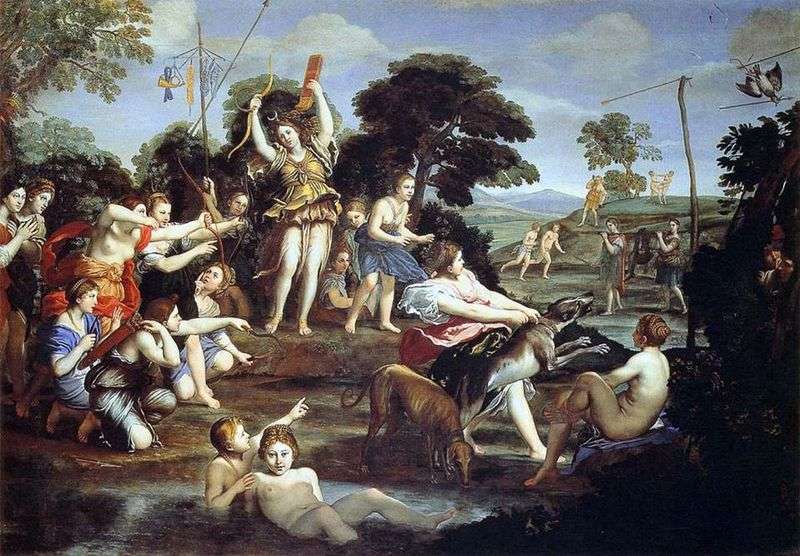 The pupil of the Bologna painting school, Domenichino in his work turned to the heritage of Renaissance artists. And if they perceived antiquity as something alive, then academicians – as the past “processing” of the Renaissance masters.

Hence the presence in the works of Domenichino on the mythological subjects of the game beginning, which in this case corresponds to the plot of the picture “Diana’s Hunt”. The canvas was commissioned by the painter Cardinal Pietro Aldobrandini for a villa in Frascati.

The artist depicted a match of nymphs in the accuracy of shooting, similar to what was described in the “Aeneid” of the ancient Roman poet Virgil. One arrow should have been noriacib in the tree, the second – in the ribbon, and the third – in the flying bird. Diana, demonstrating her skills, does not hide the joy, shaking the bow and quiver in the air, and the nymph looks at the target from the left, pulling the string. Another nymph, in the center, restrains the greyhound, ready to rush at someone hiding behind lush bushes.

So in the picture there is a motive of the myth about Actaeon, who saw the bathing naked Diana, than angered her: she turned the hunter into a deer, and his own dogs were torn. But Domenichino has only a hint of a myth and his dramatic collision, so the atmosphere of the canvas remains easy.

Playful spirit, reigning in the work, is best expressed by two young nymphs in the foreground, sitting in a creek. One of them, who had already entered the time of bodily flowering, looks at the viewer in a childlike way innocently, the second with childish astonishment points into the distance. These two girlish figures connect the viewer with what is happening on the canvas.