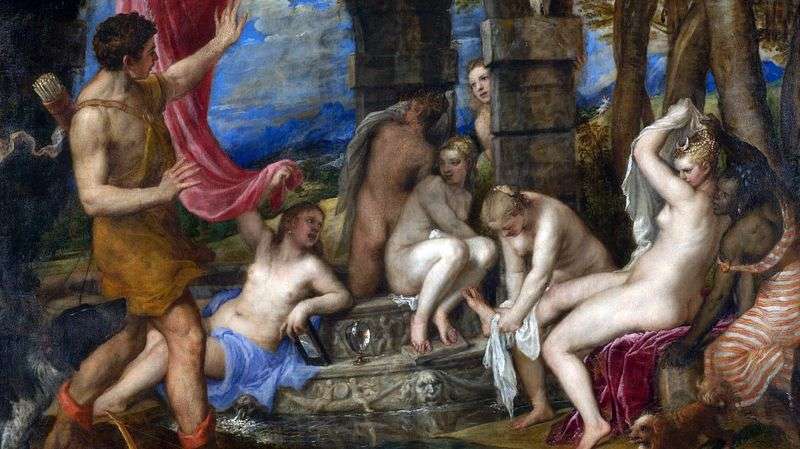 A painting by the Flemish painter Bartholomeus Spranger, “Diana and Actaeon.” The size of the picture is 72 x 54 cm, canvas, oil. The painting is based on the famous myth of the unfortunate hunter Actaeon. A young man who saw a bathing beautiful and naked goddess, Diana in anger turned into a deer, which was torn by their own dogs.

Diana, in mythology – the ancient Italian goddess of light and moon, revered by various Italian peoples. Like other Italians, Diana was identified with the Greek goddess Artemis, whose cult early found access to Rome. Attributes of Diana, like all the gods of light, were bow and arrows, and like the goddess of the night – a torch. As the embodiment of a barren moon, Diana was considered a virgin.

A companion of nymphs, severely punishing any insult to modesty, the patroness of hunters, Diana is also the patroness of the game. In alliance with Apollo, she is the punisher of the pride and self-conceit of people emerging from the boundaries indicated by the deity. Like Apollo, Diana kills people with arrows, especially women and children, and sends illnesses to people and animals. Diana was depicted either in a long woman’s dress, or with a chiton raised for convenience of hunting. Usually she has a quiver behind her shoulders, and in her hands a bow or torch.

Often, near Diana is a doe or a dog. On some images the goddess sits on fallow deer, on others she, together with Apollo, goes on a chariot drawn by the deer. The most famous sanctuaries of Diana were: the sacred grove near Lake Nemi, where the demon Verba was worshiped next to her, and the temple founded by Servius Tullius on the Aventine Hill.