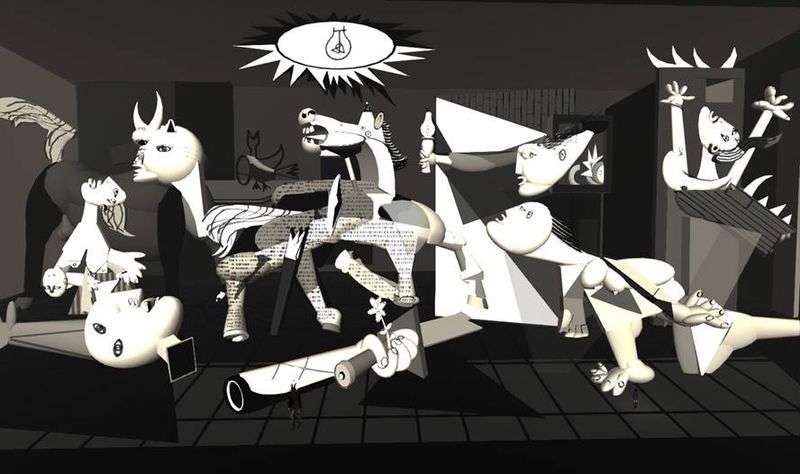 The most epic and angry work of Pablo Picasso – painting “Guernica.”

Guernica – a town in Spain, which historically belongs to the Basques. April 26, 1937 the Spaniards were shocked by the tragedy that unfolded on the territory of the municipality – Guernica has been wiped off the face of the German aircraft land, Legion “Condor”. In the city it was dropped more than 1,000 bombs, and those parts of the city that do not destroy shells, for 3 days is simply burned. Fatalities have been a lot more than a third of the total population, survivors were left homeless, have died under the ruins a lot of monuments

Oddly enough, the artist himself has never been to Guernica, however, the news of the tragedy very impressed by Picasso, however, none of the Spaniards could not remain indifferent to the news of the destruction of a peaceful town.

His anger and citizenship embodied in the master-scale canvas, which was presented at the World Exhibition in Paris. Today, one can only marvel given – a picture of three to eight meters was written just a month. Preserved evidence that the author could carry out the work for 12 hours a day.

His impressive format and the composite structure resembles a triptych painting – among the general house shapes and emotions, there are three clear fragment.

The painting was done in oil black and white and thereby reminds monochrome chronicle of terrible events. Grief, anguish, fear, despair permeate the fabric. This is undoubtedly a common human tragedy – out of place, out of time, out of realism. It is this and this tragedy depicted by Picasso.

The action takes place in close the basement, where the “closed” people, animals and birds. Presented stingy, but typical interior – the ceiling beams of the basement, slab on the floor openings of windows and doors. Foreground as if illuminated triangle, covering the main characters. Light comes from the symbolic eye lamp.

In the center of the triangle shows the agonizing horse, the head of which stretches a hand with a lamp. Under the hooves of a dying horse is a male soldier, whose body chipped into pieces. The tremendous impression on the viewer has squeezed in a hand a flower, a symbol of innocence, in combination with the wide-open, but dead eyes. In the hands of man can be considered the stigmata, as a confirmation of the innocent victims of man. The only armed warrior in the picture can no longer protect anyone – he was killed, “eaten” from the inside, and in his hand a piece of sticking useless sword. For a dead man rushed the woman, her leg almost torn off, and his eyes fixed on the lamp.

Another strong on the emotional tension is the hero’s mother, yelling over the dead child in his arms drooping. Her eyes converted to the heavens, and his mouth frozen in an inhuman scream. Tiny hands and feet, small fingers, upturned face – the most heartbreaking image on the canvas, the quintessence of horror of what is happening.

The picture is dominated by the unusual linear perspective. In addition to the construction of a linear, painting, of course, it has a certain volume and depth. In stylistic terms it is also quite easy to find inconsistencies – frank Cubism is combined with elements of realism.

Looking at the painting, will inevitably come to the feeling that the fore viewed as if through a transparent glass wall – a sort of aquarium, where the tragedy takes place in an enclosed space.

The first “reading” of the work immediately notice the bull and he, too, is not without reason. Minotaur, the bull – a symbol of the war in demand in Spain.

If the agony and suffering in the picture illustrated clearly and understandably, the main reason is still a mystery of universal chaos. Who killed the child, mutilated man, wounded horse, started the fire? The enemy is invisible, invisible but inevitable and elusive. It is not clear who needs to confront, from whom escape and flee – that is what strikes fear.

Picasso phenomenon in – amazing real sense of horror, even when the apocalypse is quite conventional technique is far from realistic.

The picture was taken ambiguously society. Some witnesses claim that to the web are often rotated backs, however, the recognition of it yet earned. For example, Ibarurri Dolores Gomez was impressed by what he saw, and said that the work is loud accusation of fascism and the Franco regime.

“Guernica” by Picasso made famous all over the world. To her back turned after the tragic events in Nagasaki and Hiroshima. The canvas was a long time in the Prado Museum, both of himself and wanted Pablo Picasso, but in the 90s it moved to Madrid. And half a century ago, the picture attracts attention and is the strongest emotions, it is possible to stand outside for very long, it is in every part of the new items and read them, filled with pain and suffering of men.