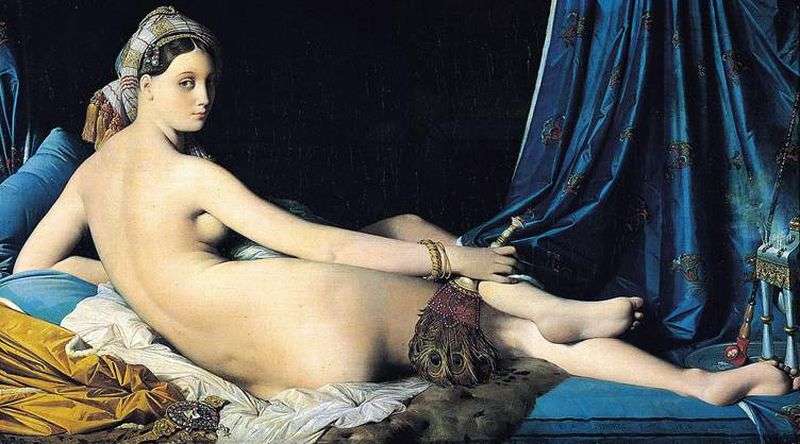 “Grande Odalisque ” – a picture of the French painter Jean Ingres, written in 1814. He wrote his painting commissioned by the Queen of Naples, Caroline Murat. This picture has become the most important and famous achievement in all the work of Ingres.

In his canvas Ingres, imitating the greatest artists of the Renaissance, idealized and improved features of models posing for him to get expressive form and achieve ideal proportions.

In his film “Grande Odalisque,” the artist said his model 3 additional vertebra, that at one point it was noticed by critics. But despite the fact that the French painter broke

Nude odalisque shows how often Ingres loved to write from the back. Her body and posture are different amazing flexibility and femininity. Ingres masterfully portrays crumpled fabric folds and draperies.

In the picture are abundantly present oriental ornaments and attributes, such as hat, fan and smoking accessories. Widely known for the fact that the head of a beautiful odalisques almost identical to the female head depicted in the painting by Ingres, “Raphael and Fornarina.”

Such jewelry as bracelets on her wrist and a hoop of gold, rubies and pearls decorate the already committed by the young girl’s body.

Critics at the time took a picture of “Grande Odalisque” is ambiguous. Ingres has been criticized for failing to anatomical proportions and for the abandonment of living concreteness. Other artists were delighted mysteriously girls, to which attracts the exotic East.

After the fall of Napoleon, customer could not take a picture. In 1899, the painting was purchased by the Louvre, which is to this day.