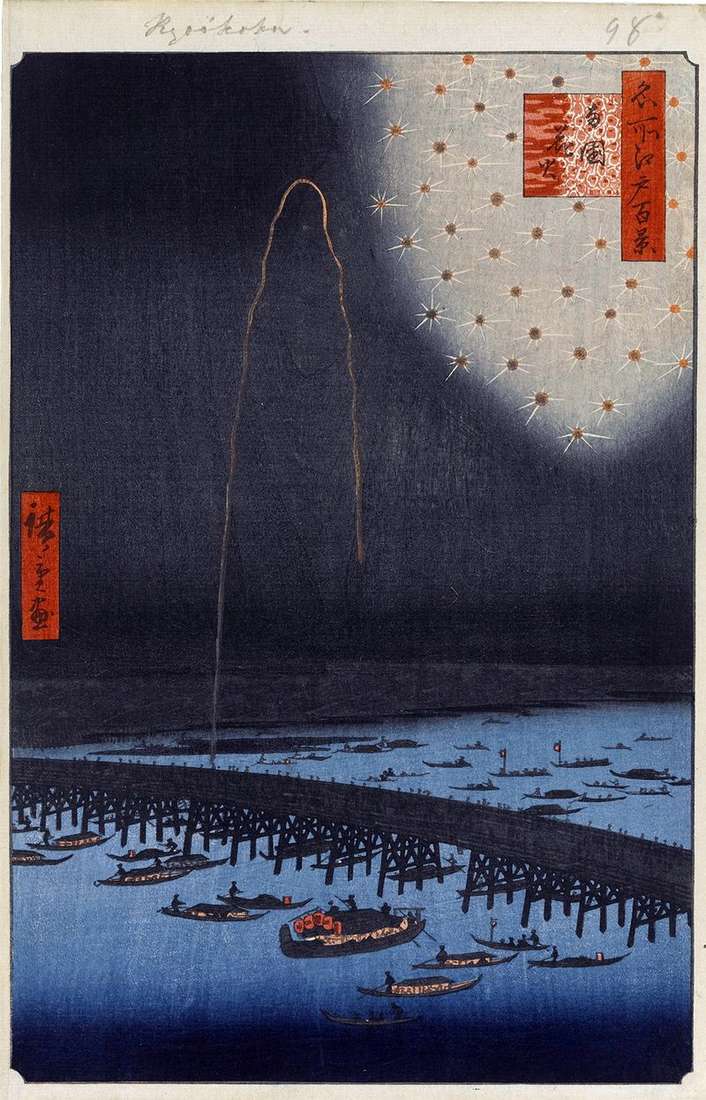 In the early 1730s, during the reign of the eighth Shogun Yoshimune across Japan, famine raged, cholera spread, and more than a million people died. Bakufu ordered to organize a grandiose cleansing festival banishing evil spirits of hunger and disease, an important part of which was fireworks on the bridge of Regokubasi. It was held May 28, 1833, under the name of Cavabirka – “Opening the River.” Fireworks were observed from the bridge, from boats or from the numerous establishments around the bridge. Responsible for the fireworks were the heads of two companies for its production Kagiya Yahoe from the Asakusa district and Tamaya Itibe from Regoku Hirokoji. Tamaya was responsible for the fireworks in the upper reaches from the Regokubasi Bridge, and in the lower reaches the responsibility was carried by Kagiya. The black sky in the fireworks of Hanabi occupies two thirds of the sheet.

On the river you can see a wide variety of boats. In the center of the foreground there is a large boat in the form of a small house – it is yakatabune, only wealthy townspeople could afford to lease such a boat. Here, boat-shops with lanterns on a pole floated, from which snacks and alcohol were sold, and boats, on which the musicians played. An early version of the engraving strikes a subtlety, the veracity of color shades. In the later version, the coloristic decision is somewhat rectilinear, despite the fires of fireworks that stand out more vividly against the background of the dark sky.