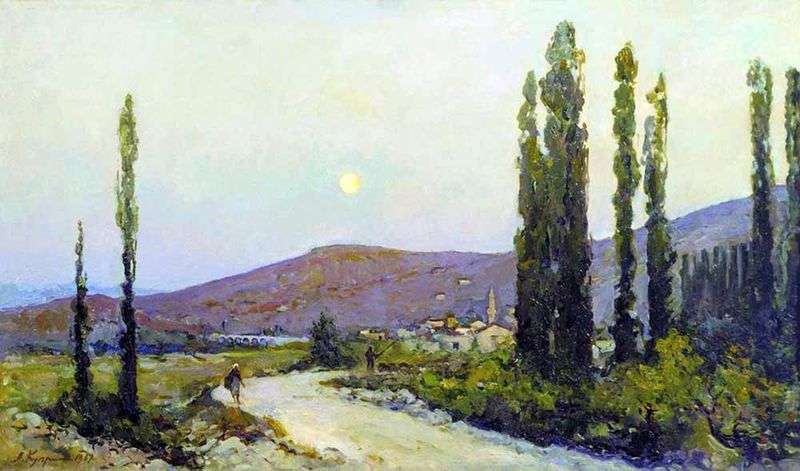 The best of the Crimean landscapes of A. V. Kuprin and, perhaps, in general his best picture is “The Beasal Valley”. This is one of those works of Soviet painting, in which the achievements of socialist realism were embodied in the 1930s by his optimistic, life-affirming acceptance of the world, the lively emotionality of the artistic image, the generality of judgments about life. Kuprin’s work is written in the tradition of easel landscape painting, in which he creates his own, existing according to the laws of his internal laws, the rich and majestic world of nature. The spectator must deepen in order to capture the movement of his inner forces in the living, natural appearance of the landscape and to feel in them the human content of the picture in order to appreciate the high quality of mastery,

The main motive of the picture that introduces us to her world is the image of a road that goes deep. Its dusty, stony strip goes between the roadside bushes, then it turns to the right, and this turn is marked by a figure of a man who, like the slender silhouettes of poplars, allows you to count the depth of space. Next appears the figure of a shepherd returning with a herd. And not so much as a glance, how much a feeling can be guessed by the further movement of the road hidden by the bushes from the viewer’s eyes.

Naturally, each viewer sees the road shown here, but one has to penetrate into the essence of the picture, to the compositional meaning of the depicted motive, in order to understand the fullness of its figurative content. Then, before you begin to reveal the inner movement, piercing the image of nature, imprinted on the canvas.

The road disappears in the bushes and hills of the landscape. Its movement draws you into the three-dimensional fabric of the picture, making you perceive the human content that the artist reveals here. It is here that the state of nature begins to be felt, when after the summer southern heat there is evening silence. In this motif of the road, on which the dust raised by the people has settled, the idea of how after a hot day of work there comes such a time when a person, having turned away from day-to-day worries, by feeling and reason, bypasses the familiar and beloved world of beautiful nature in the evening time.

The day’s dying day, the theme of the change in the muscular, noisy movement by the silent and calm movement of the night, bear in themselves great human reflections, a clear thought of life, of its beauty and majesty.

The painting shows the transitional state of nature, and the main thing in it is the inner movement that permeates nature in this evening hour. Day and night, movement and peace, dying light and the coming darkness, the transition from the past to the future – all this is woven into a single complex whole in the picture. It is possible to acutely perceive in the transitional phenomenon its inconsistency, inconsistency. But it is possible to open the whole harmony of the combination of the forces of such a transitional moment, to see in it the possibility for a full-sound narrative about the movement of life, the development of thought. This is what Kuprin asserts, communicating the fullness of life to the artistic image. And this is given only in the case when the volume form, composition, drawing, color are taken in motion, when this dynamics of life becomes visible and visible in a true image of nature.