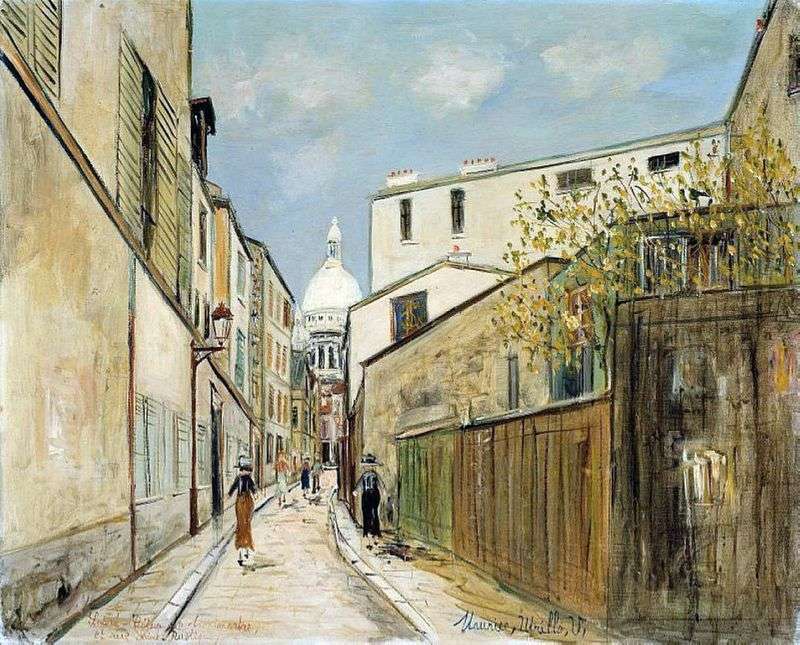 Basilica Sacré-Coeur – one of the permanent “heroes” on the canvases of Utrillo. The artist wrote this church many times from various points at different times of the year, but especially liked to depict it in winter to use the snow cover effect. In some of his paintings, the basil is only guessed, sometimes it dominates all the buildings, and in this case its majestic dome seems weightless and literally soars in the sky. This effect was achieved due to the fact that the artist did not trace the dome with a noticeable outline, like the houses surrounding the cathedral. The painting was written in about 1927, at the height of the “color period”.

The street of Saint-Rustic was named after one of the priests who served with Saint Dionysius. Saint Rustic, like St. Dionysius, took martyrdom on the Sacred Hill. Like many streets in the area, the street of Saint-Rustic was once simply a winding path leading to the top of a hill where the white dome of the Sacré-Coeur basilica now rises not only over Montmartre, but over all of Paris. This church is relatively “young” – it began to erect only in 1876, after the events of the Franco-Prussian War. The construction of the Sacré-Coeur basilica was completed in 1914, and consecration took place only in October 1919.