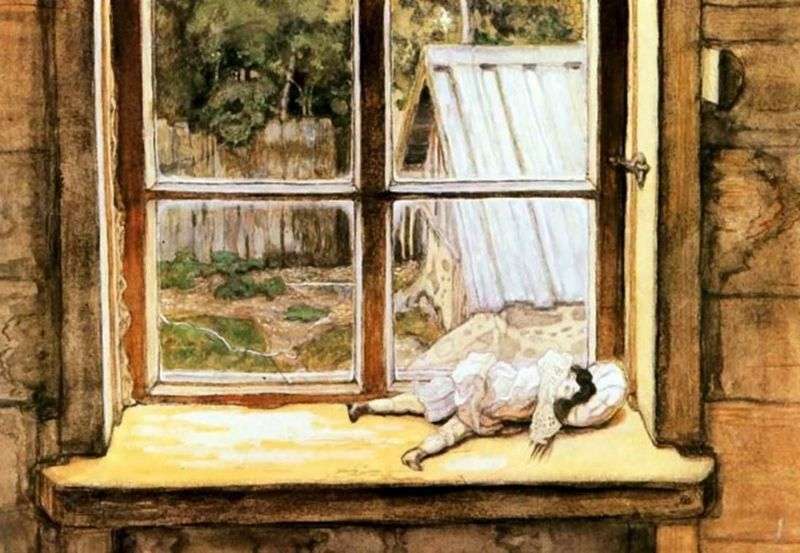 Mstislav Dobuzhinsky, one of those artists, is among the people that they knew – they are created for art. Despite all the setbacks, he continued to work and improve himself.

The artist often experienced creative torment, but he continued to create exactly. The painting “The Doll” of 1905, was written by the author, when he was creating a series of works about Petersburg, he compared the old city with the new one, tried to describe what spirit reigned in the life of the city. The author often tried to catch and reflect the spirit of the era.

The painting “Doll”, contains a deep meaning, the old doll on the windowsill of a long-abandoned wooden house, symbolizes memories of the past, about childhood, about significant events in the life of a person.

In the works of Dobuzhinsky early twentieth century, there is some nostalgia, and even depression, the artist genuinely misses the old city. The view from the window resembles an old, kind rural courtyard, where there is not a large barn.

Although the author drew an old house, which is in St. Petersburg, he looks like a rustic cozy house, which used to be a lot in the city. The artist shows how the time has changed, and the old battered doll reminds a carefree old city, where happiness, benevolence, innocence could be found on every corner, now it’s all there is, only blessed memories remain.

The picture forces us to rethink human values, and also to think whether changes are good, whether everything is new to man. Each for himself must find the answers to these questions, the canvas only leads to them.

At the sight of the work, the viewer can have different emotions, as the picture helps to remember and think about the past, and each person has different feelings about this matter of relief, nostalgia, hatred, moral satisfaction.