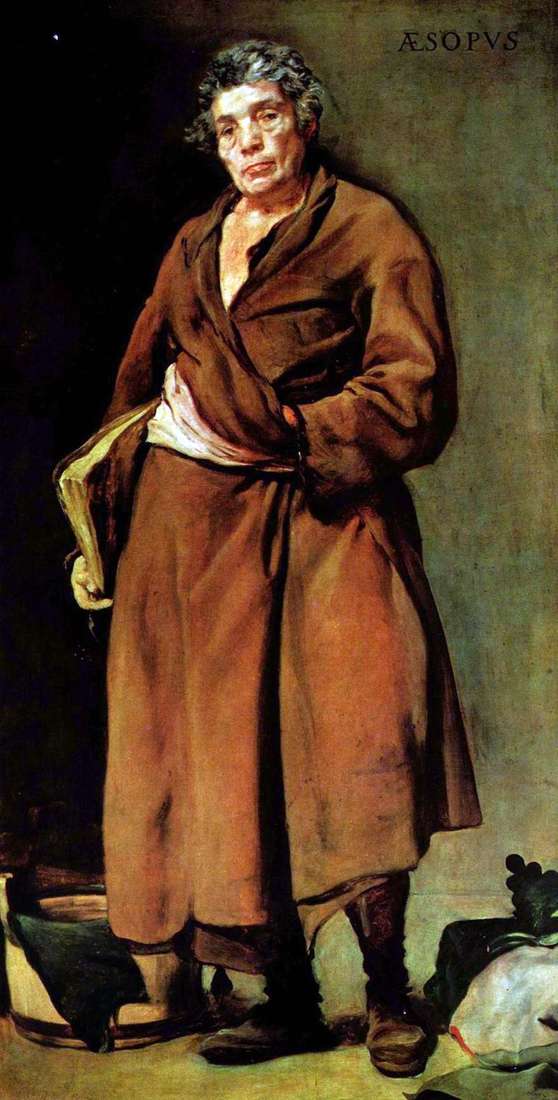 Painting of the Spanish artist Diego Velasquez “Aesop”. The size of the picture is 180 x 94 cm, canvas, oil. This picture of the painter Velasquez was presumably part of a series of paintings destined for the royal hunting castle of Torre de la Parada near Madrid.

Aesop, an ancient Greek fabulist, considered the creator of the fable. According to legend, Aesop lived around the middle of the VI century BC. Legends depict Aesop as a folk sage, a holy fool and a lame slave of the Jadmon’s self, who was innocently thrown off the cliff at Delphi. He was credited with the stories of almost all known fables in antiquity, processed by many fabulists – from the ancient Phaedra and Babriia to Jean de Lafontaine and Ivan Krylov.

Actually, by Aesop’s fable is meant a fable, in which actors are animals and other dumb essences and objects allegorically representing people, their characters and deeds. The book of Aesop’s fables was first collected and presented in prose by Demetrius of Faler at the end of the IV century.

Up to us, from antiquity, only the free poetic alterations of Bybria in Greek, Fedra and Aviena in Latin, have come down; dry prose paraphrases of Aesop’s parables, which are entitled in many ancient manuscripts as “Aesop’s Fables”, were mostly composed in the Middle Ages.