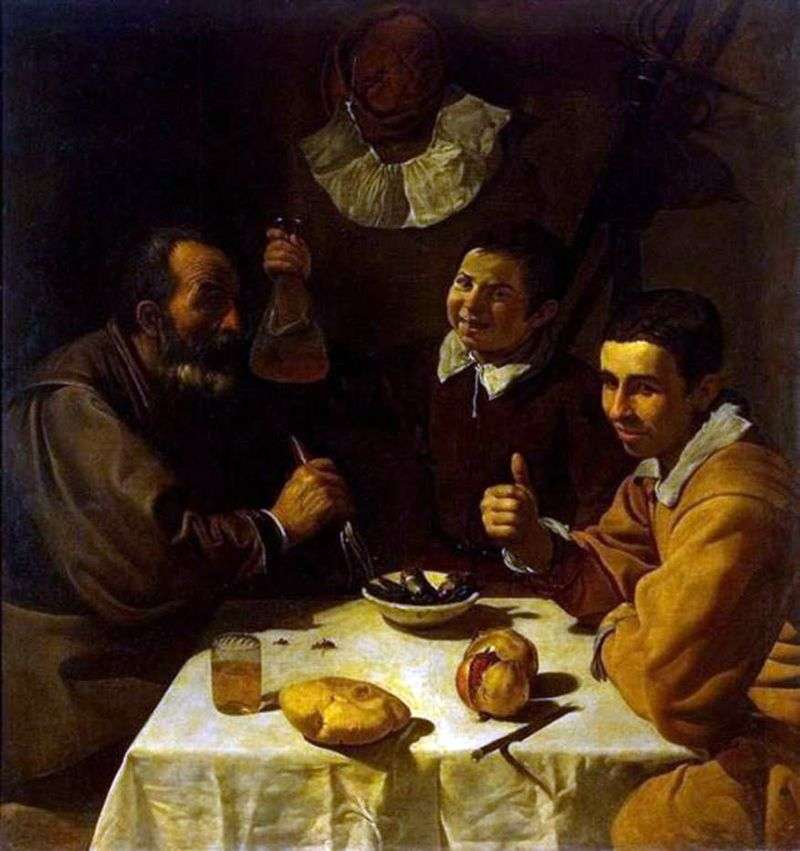 Spanish artist Diego Velasquez was born and raised in Seville. His first works – to them belongs and the Hermitage “Breakfast” – are written in this city.

Spanish art has long been constrained by religious themes. At the turn of the XVI and XVII centuries there are pictures, the characters of which are not characters of scriptures, but ordinary people. The so-called Bodegones – images of scenes in a dark interior, illuminated only by a narrowly directed beam of light, with a single or a few figures and an obligatory still-life, are widely spread. In the works of Velasquez in the Seville period, this genre took the leading place.

“Breakfast” – one of the earliest works of the young master. He feels a passion for nature, the desire to convey the scene as real as possible. Velazquez was posed by well-known people, their images are found in many works of the artist. So, the old man on the left is repeated in a similar version of the Budapest Museum. The boy who is in the center of our picture can be seen in “Musicians”, “Cooking eggs” and “Seville water seller”.

As for the figure on the right, there is an assumption that this is a self-portrait of Velasquez. Despite the artist’s desire to make the scene easy, the characters look positively. Here, there is still no freedom, artistic performance, which are characteristic of the works of Velasquez in the mature period.

With great care, a still-life was performed. The artist tries to reproduce the texture of things. He admires the game of wine in a glass, red pulp and brown pomegranate skin. Carrying the transfer of volumes, Velasquez places the knife on the very edge of the table, as if not enclosing the boundaries of the picture, “tearing” its plane.

In this detail you can see the naive admiration of the young artist for the boundless possibilities of painting. “Breakfast” is one of those works that not only help to understand the origins of the painter’s independent and especially fresh creativity, but at the same time they are of interest for a general understanding of the history of Spanish art in one of its crucial and most significant stages, during the period of the formation of realism XVII century.

The picture of Velasquez belongs to the earliest acquisitions of the Hermitage; entered before 1772.