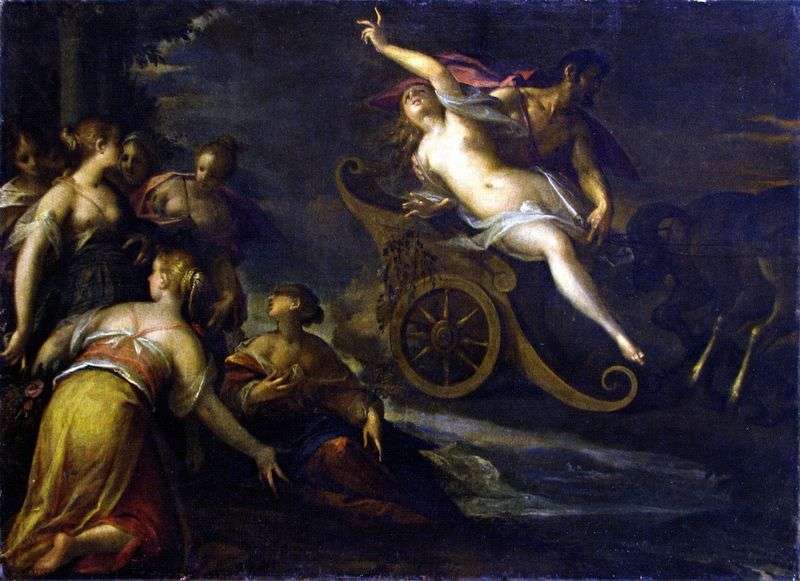 Painting of the German artist Hans von Aachen “Rape of Proserpine”. The size of the painting is 45 x 63 cm, canvas, oil.

In his paintings of mythological themes, Hans von Aachen preferred the depiction of Roman-Italic gods and goddesses, rather than Greek, despite the fact that almost all the myths of the ancient Greeks were romanized by the Romans. The goddess Proserpina, in Roman mythology, mistress of the underworld, wife of Hades, daughter of Ceres. Its name is nothing more than the Greekized name of Persephone.

The focus of the legends about Proserpine is the myth of her abduction by Hades. Poetry and the fine arts singled out in the legend two main points: the abduction of Proserpine during the gathering of flowers and the wanderings of Ceres in search of her daughter. When the human race began to threaten starvation – as the land left by Ceres ceased to be fertile – Jupiter decided to restore the rights of the mother and reconciled Ceres with Hades, who agreed to release Proserpine annually on a date with her mother for a period from spring to autumn.

This myth symbolizes the change of seasons, the alternation of flowering and withering, the transition from life to death. Later Proserpin was confused with Hecate, the goddess of the mysterious beginning and nightly fears. The dual character of Proserpina was also reflected in the cult: its spring holidays were gay, the autumn holidays were mysterious.

Similarly, in art, we meet Proserpin then as the underground goddess sitting on the throne next to Hades, then as the goddess of fertility and plant life, together with Ceres. In the first case, Proserpine served as a garnet, in the second – ears of corn, poppy, daffodil.