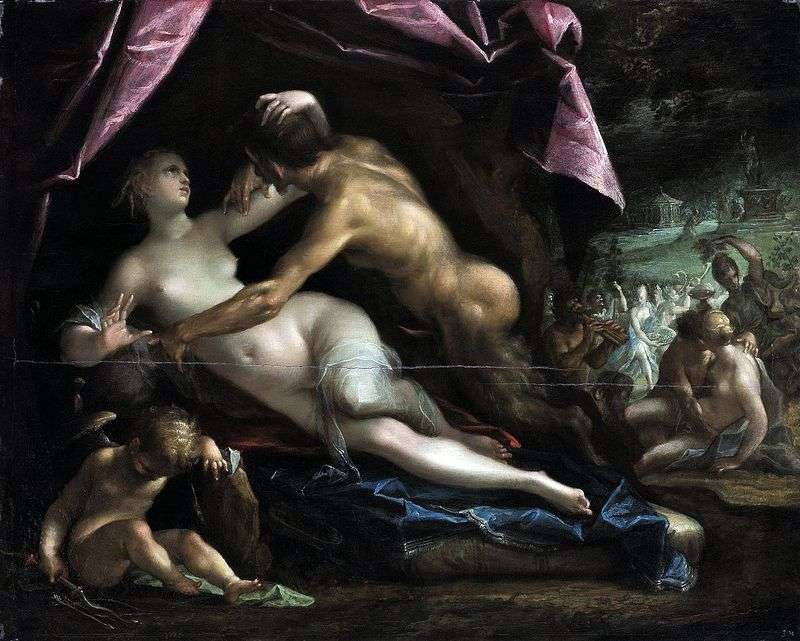 Painting of the German artist Hans von Aachen “Pan and Selena”. The size of the picture is 40 x 50 cm, wood, oil. Pan, an ancient Greek god of Arcadian origin. Pan is considered the son of Hermes and the daughter of Drion. He was born with goat legs, a long beard and horns, and immediately after birth he began to jump and laugh.

Frightened by the extraordinary appearance and nature of the child, his mother left him, but Hermes, wrapping him in hare skins, took him to Olympus and before that amused all the gods, and especially Dionysus with the sight and liveliness of his son, that the gods called him Pan because he delivered all great joy. Pan was the patron god of the herds. The magnificent valleys and groves of Arcadia – the kingdom of Pan, where he sports in the circle of merry nymphs.

Pan was also considered the god of incipient light, at sunrise. To this view is also the myth of his love for Selene, which Pan has placed in his place by giving her some of his herds. As a god, full of natural inspiration, he was a god foreteller; in Arcadia was his oracle, the priestess of which was Erato. Selena is one of the deities of Greek mythology, also known as Mene. Due to the fact that both names of the goddess, especially the first one, preserved their nominal value of the moon in the month of the month, the true meaning of the epithets and attributes of Selena and the mythological stories about her are fairly transparent.

Poets then refer to Selene as the sparkling eye of the night, then they are portrayed as a lovely woman in the sky, with a torch in her hands, leading the stars when she appears in a silvery gleam at the time of the full moon. Selena is the daughter of Hyperion, or Helios, that is, the Sun; she has wings and a golden crown on her head, from which a soft light is spreading across the sky and earth; she is honored with sacrifices on the full moon days; The day of the spring equinox is dedicated to her, when Selena, having made a long journey and washed in the waves of the ocean, puts on her sparkling clothes and harnesses her brilliant horses in her chariot.

In heaven, Zeus’ lover was Zeus; from it she gave birth to a daughter Pandia, who was honored in Athens also near the spring equinox; in the mountain Arcadia friend of Selena was Pan.