Home ⇒ 🎨Hou John ⇒ A rider in the night by John Howe 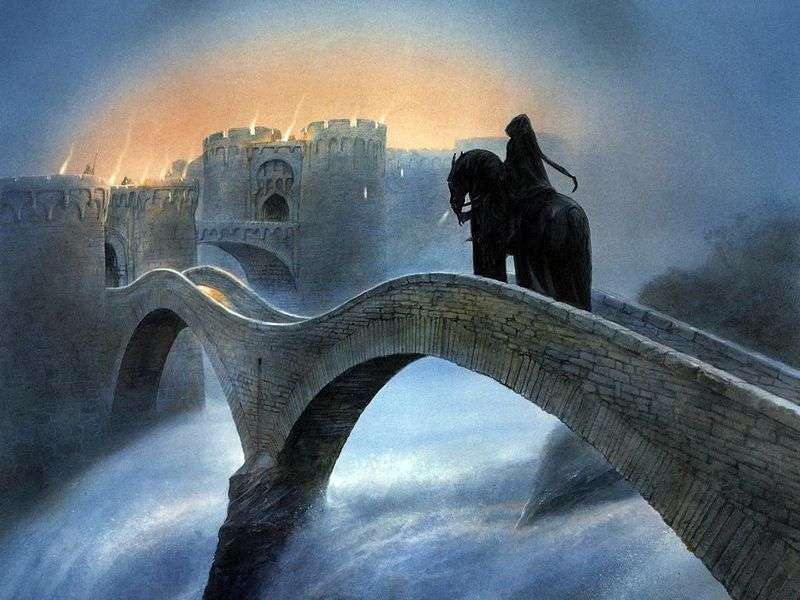 As a child, John Howe purchased adventure books in paperback, and read them with a booze, Frank Frasett’s illustrations in his eyes acquired the status of divine worlds, which he repeatedly copied into pastels. At the same time, in the bookstores where Hou used to buy comic books, legends about Conan Barry Smith and Bemi Wrightson began to appear. At this time John Howe read “The Lord of the Rings”, first “Two Towers”, then “The Return of the King”, the most famous of the three published.

On the idea of the opportunity to illustrate “The Lord of the Rings” John Howe pushed art calendars, and he began to make his own versions of calendars, painting scenes of an adventure book. None of these calendars, unfortunately, is preserved, although, as the artist jokes himself: – “maybe a dusty box was lying under the bed…” The ghost of a sad knight, the messenger of death. In the painting “The Horseman in the Night,” John Howe depicted the inaccessible walls of an ancient fortress of the distant world.

Inside the fortress there is a glow of fire, illuminating the night sky – there is a battle. From the blue haze of the morning mist, the rider in a black cloak appeared inaudibly, stopped, creepy, silent. The black rider always appears where people die – he is the messenger of death.