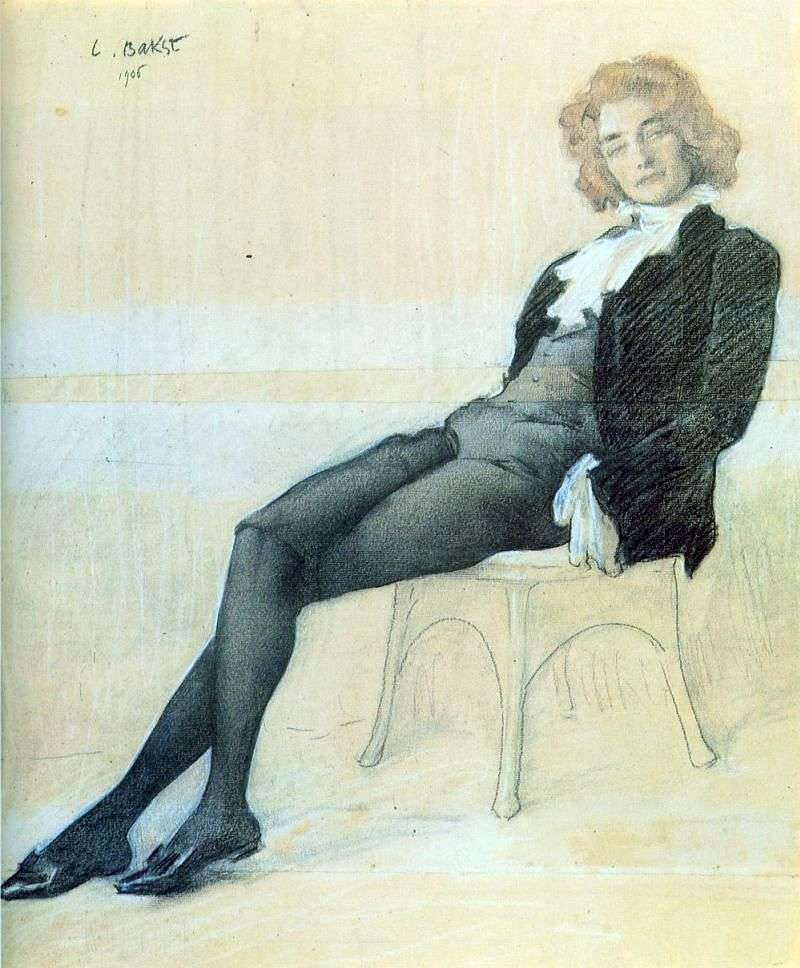 Portrait of a graphic, executed on paper. The artist used a pencil, used sanguine. Moreover, a sheet of paper glued together.

Originally it was a sketch that Bakst later finished. Zinaida Nikolayevna had an absolutely amazing figure and wonderful legs. To show her long, endless legs, Bakst could only have glued some more paper.

The portrait was initially seen as scandalous and indecent because of the costume in which Zinaida Gippius was dressed. This is the costume of the little lord Pamplerob, the hero of the story, written by the Anglo-American writer Barndad in 1886, which was translated into 17 foreign languages, including Russian.

The hero of the story is a seven-year-old American, a former convinced Republican, who by will of fate found himself in England. Moreover, even having learned that by birth he is a lord, the hero conducts democratically and amiably with all. This golden-haired boy appeared before the readers and in front of his grandfather-lord in a black velvet suit, in short trousers, in a shirt with a lace jabot, and this fashion was then of mobile boys of the end of the nineteenth century.

Already the fact that Zinaida Nikolaevna tries on a similar suit, which she was extremely walking, contained an element of irony and provocation. Portrait of Zinaida Gippius of Bakst’s work entered the Tretyakov Gallery in the year 20. Previously, he was in the collection of Sergei Aleksandrovich Koussevitsky, a famous Moscow collector.

Koussevitzky was a very prominent figure in the artistic life of pre-revolutionary Russia: a virtuoso-double bass player and conductor. The conductor is special. His program consisted largely of works by contemporary Russian composers. Thanks to him, the whole world learned the music of Scriabin, Rachmaninov, Stravinsky and other contemporary composers.

A native of a poor family, Koussevitzky married a representative of a very wealthy merchant and philanthropist Moscow dynasty, Natalya Konstantinovna Ushkova. On the dowry he organized the Russian Musical Society, in which he saw the first scores of contemporary Russian composers. Sergei Alexandrovich was an indefatigable popularizer of Russian music.

His collector and popularization activities, he continued and after the emigration. Already in the West he began to collect a collection, helped Russian emigre artists. In particular, he ordered the design of his house in Paris Natalia Goncharova, which immensely helped her financially. I sheltered in my Boston orchestra as secretary my friend in Moscow patron and collector Henrietta Leopoldovna Hirschman.

The collection is its fine directivity and high quality works.