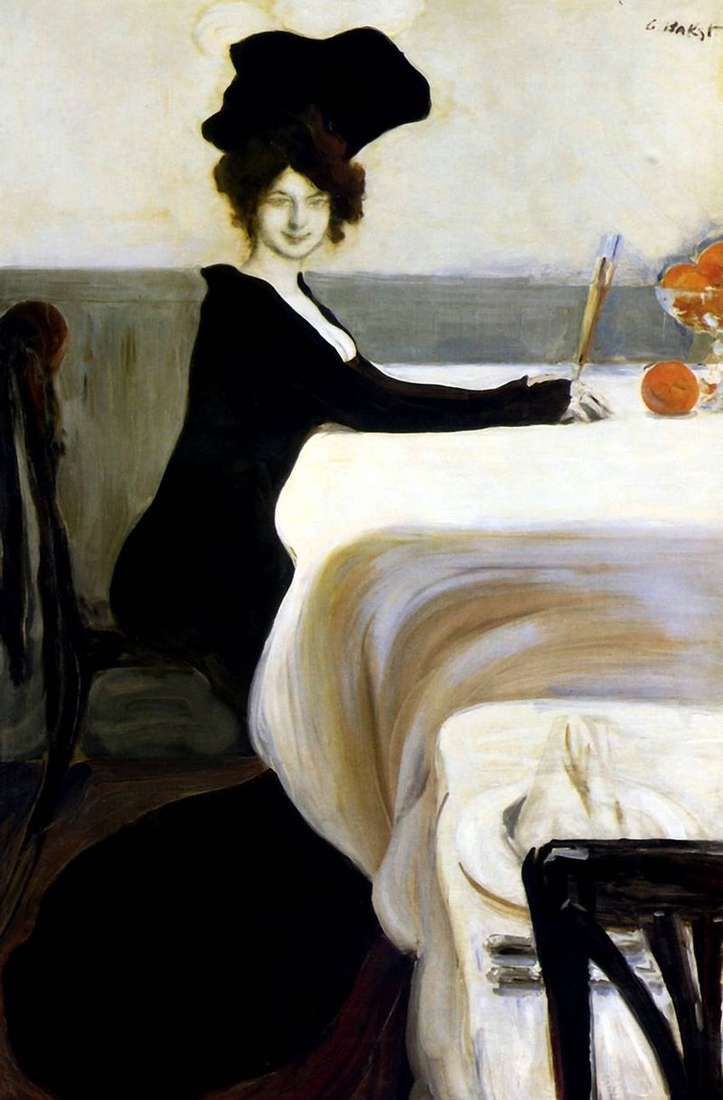 The painting “Dinner”, nicknamed in the humorous opposition to Serov’s “Girl with Peaches” “The Lady with Oranges” – one of the most popular canvases by Bakst. On the one hand, this large canvas refers to the genre of the “portrait of a stranger” that is very common in Russian art of the late XIX – early XX century. On the other hand, the work is distinguished by a number of features that make it unlike the salon portraits of nameless beauties. The artist creates an image close to the specific type of “woman-vamp”, widespread in European modernity, which had a great influence both on the cinema and on the literature of that time.

“A cat is sitting at a table in a ladies ‘dress, her muzzle in the form of a round plate, in some horned headgear, the thin legs in the ladies’ sleeves are stretched to the table, but she looks away, as if the dishes placed before her are not to taste, but she has to take off something else on the side, her waist, the whole warehouse and the figure are feline, as disgusting as the English crook and Beardsley’s freak. “An intolerable thing!” – contemptuously wrote V. V. Stasov. And quite in a different tone, slightly ironically, but not without admiration – V. V. Rozanov: “The stylish decadent fin de siècle is black and white, thin as an ermine, with a mysterious smile, à la Gioconda, eating oranges.”

The plot motif of a lone figure in the interior of a cafe or restaurant, fragmentary composition is suggested by the Impressionist paintings, but Bakst is not limited to fixing the impression of nature, it transforms it. Transforming the outlines of the female figure and objects, subordinating them to a single rhythm, the artist likens the model to a certain exotic plant, crowned with a giant flower-hat, and turns it into a part of an ornamental pattern.

The canvas is built on the game of space and line. Gradually rising from below and from left to right the rhythm of white and blue planes organizes diagonal movement in depth. Its dynamics is supported by the wavy edges of the tablecloth, intersecting with the train of the dress, and then with the curves of the female figure.

At the same time, the vertical of the silhouette stops this movement: an oval train on a lilac-blue floor, brown-black silhouettes of “snake-like” hands on a white table and, finally, a hat on a bluish-gray background of the wall are projected in one plane. Flowing strokes sweep across the canvas, generalizing and flattening the form to an applicative spot. Painting turns into graphics, which allows you to compare the easel canvas Bakst with posters Toulouse-Lautrec and Steinlin.

Having chosen Alexandra Benois’s wife Anna Karlovna as an external prototype of the heroine, the artist does not set portraits in this case. Imagining the whole face of the model – a person, a figure in a long velvet dress with a train, – Bakst creates a characteristic for his time ghostly and at the same time sensual image of the “restaurant stranger”, both attractive and evil.

Luminous, like porcelain, the face remained unwritten, Bakst only outlined his oil graphics on an easy schedule: almond-shaped eyes, a thin nose, a sharp inverted “sickle” of scarlet lips. And it’s not a matter of hurrying before the opening of the exhibition, and not even of “ingenious negligence,” but in the combination of various techniques and techniques of modernity-like combination of reality and convention.