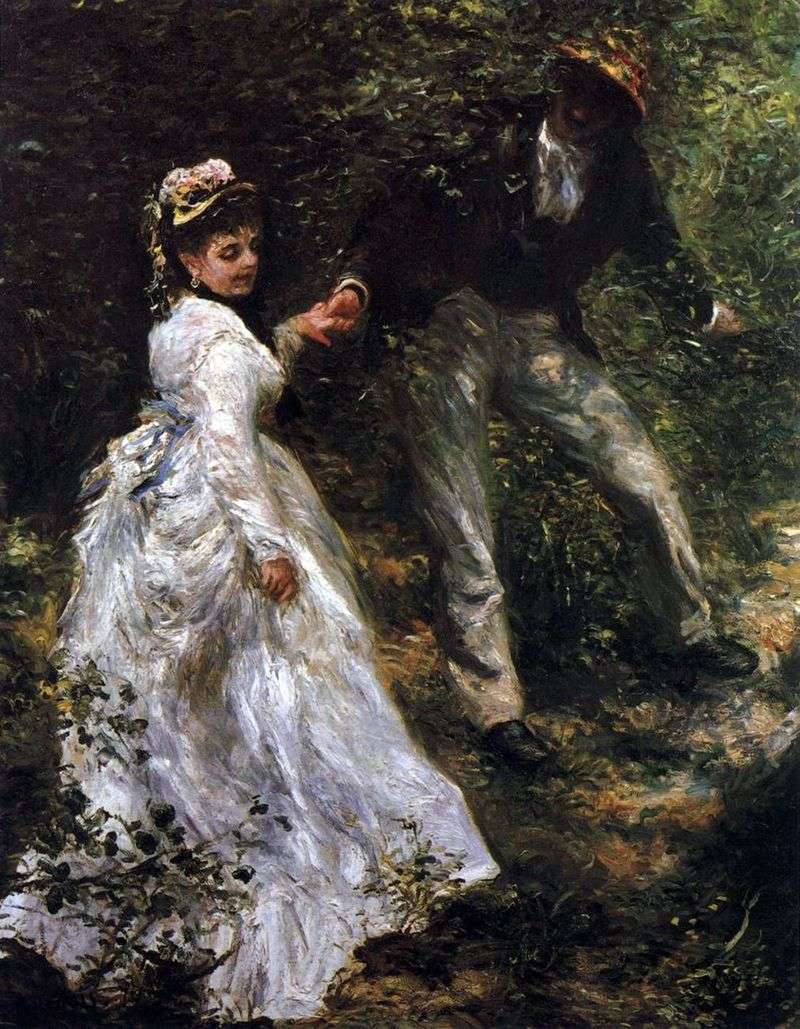 A wonderful vivid example of “Renoir’s” impressionism – the painting “Walk”, completed in 1870.

The plot of the picture is unpretentious – a gallant couple walks against the backdrop of blooming greenery, but what an embodiment! An incredibly light palette, and a living, “vibrating” technique of writing.

The lady, dressed in a lush long snow-white outfit, is the brightest moment in the picture, the helpful young man is slightly hidden by the shadow of the thick crowns of trees, which does not interfere with his flawless costume and hat with short brim. On their way, a certain obstacle suddenly arises – we can guess his presence by the poses of the heroes, and the young man gives the lady a hand, helping him to overcome it in order to continue the unhurried walk.

It is believed that creating the work, the painter asked to pose for another brightest representative of impressionism, landscape painter Alfred Sisley, while a young woman named Rafa “played” the women’s party. All she knows about is that she was the beloved of the famous musician Edmond Maitre.

All the canvas is written in short strokes, which create a thorough image – we can easily consider faces, outfits, foliage and the finest chiaroscuro. This meticulous technique allowed Renoir to create a masterpiece that is literally filled with volume – it seems that we are about to hear the birds chirping and feel the breath of the summer heat. The author emphasizes the violent, and most importantly, living colors of the summer, harmoniously fitting into this beautiful entourage a young couple who performed the day promenade.

Before you get a permanent “registration”, “Walk” wandered from one respected collection to another. Purchased by Gustave Gupi, she was later resold to the famous French collector Paul Durand-Ruel, who patronized all the Impressionists with all possible energy, investing a lot of money in organizing exhibitions to sell and popularize their new art. At the beginning of the 20th century, the painting was in Germany in a private collection, inherited. Finally, in 1989, The Walk was bought by the Getty Museum in Los Angeles for more than $ 17 million, breaking the record of value among all Renoir’s work, where it is still displayed.

It is also known that the painter created another version of the “Walk”, five years later, but this canvas was firmly established in the USA in the private collection of Frick in New York.