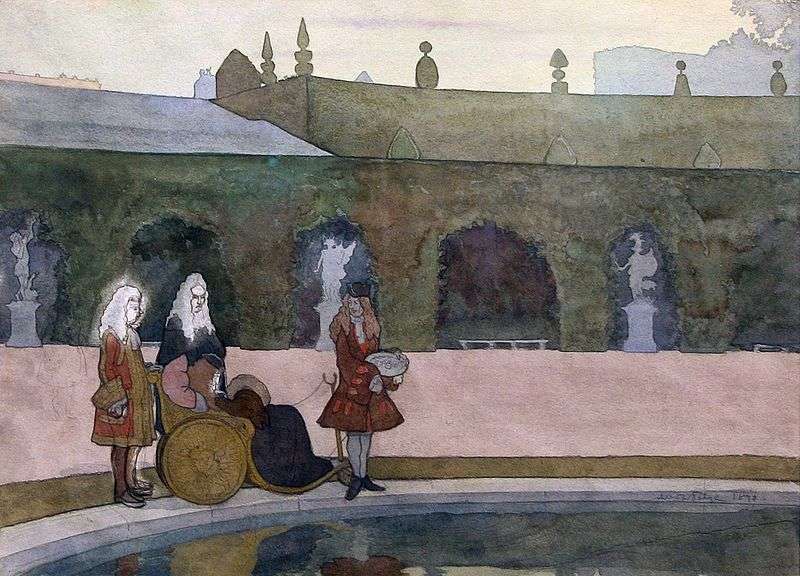 The theme of the painting Benois “Versailles: Louis XIV feeds the fish” was inspired by the walks of the artist himself on Versailles. The extinction of the “king-of-the-sun” era on the eve of the French Revolution was associated with Benoit’s understanding of the “twilight” period of eras in Russia. The faint coloring of autumn leaves, the dull, like moss-covered silhouettes of walking figures, the ghostly entourage of Versailles Park, created as a model of an ideal world, all this caused contemporaries a feeling of nostalgia.

To work in the theater, he first turned in 1902, having issued an opera by R. Wagner “The Death of the Gods” on the stage of the Mariinsky Theater. The fascination with the theater, and especially the ballet, was so strong that, at the initiative of Benois and with his direct participation, a private ballet company was organized, which began in 1909 a triumphant performance in Paris – “Russian Seasons”. Benoit, who joined the troupe as director of the artistic section, performed the design for several performances. One of his highest achievements was the scenery for the ballet by I. Stravinsky “Petrushka.”

In 1926, Benois, having made a choice between the difficulties of emigrant existence and the increasingly frightening prospect of life in the Soviet country, left for France. There he worked mainly in theaters: first in the Grand Opera in Paris, and after World War II – in La Scala in Milan.

He worked at the same professional level, but could not create anything fundamentally new and interesting, often content with the variation of the old, the legendary, ballet Petrushka. The main work of the last few years was his memories, in which he detailed and fascinatingly resurrects the years of his childhood and youth.