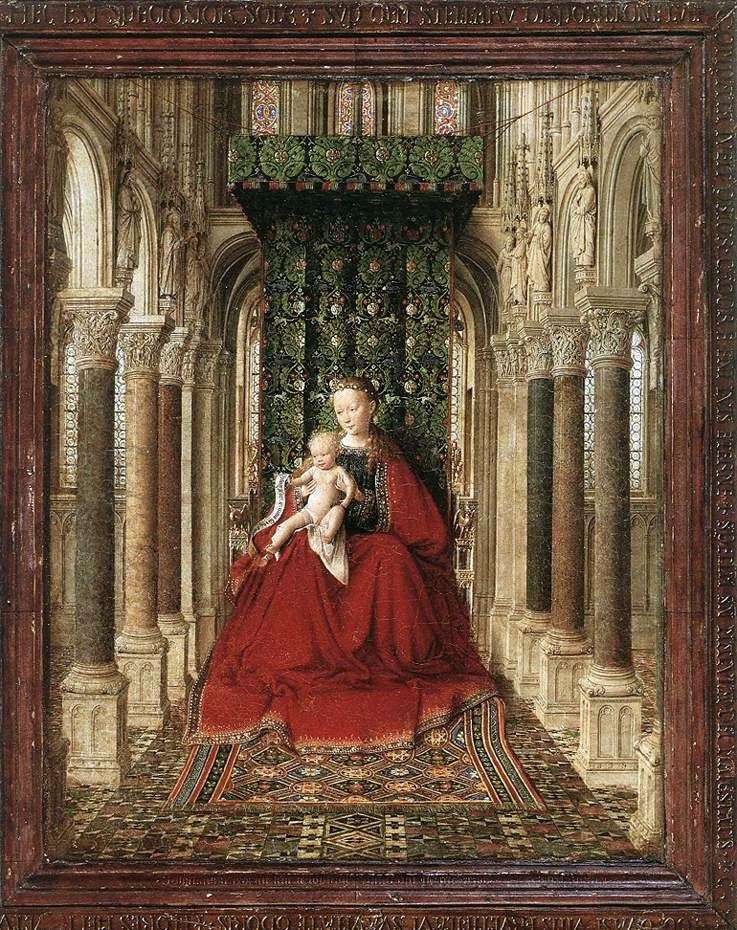 This is a small-sized work – a true masterpiece of Dutch art of the XV century. In the central part of the triptych – the Virgin Mary with the Child in the luxurious interior of the Gothic cathedral, sitting on a magnificent carved throne between two rows of colorful columns of jasper and marble. The left wing depicts the Archangel Michael, clothed in chain mail and armed with a shield, a spear and a sword. He represents the Virgin and the Infant donator, the customer of the triptych.

The name of the man is unknown, it is assumed that he is from the Genoese clan Giustiniani. On the right wing is St. Catherine of Alexandria with traditional attributes, the “tools” of her martyrdom: a sword in her hand and a torture wheel at her feet. Of great importance is the text given on the triptych. These are quotations from the Bible and other Latin maxims. The child holds a message with the text, the so-called parcel: “Learn from me, for I am meek and lowly in heart”.

On the original frames of all parts of the picture are inscriptions, on the bottom bar of the central panel in Latin it is written: “Johannes de Eyck fulfilled and completed in the year of the Lord 1437. How I managed.” These words were available for reading only in 1958, almost 520 years after the creation of the triptych! Until that time it was believed that the work belongs to an earlier period of the master’s work. A small amount of work allowed the owner to transport it. The artist’s technique amazes with filigree: the minute details are written out, which can only be viewed through a magnifying glass. In this case, the increase does not reveal any unsure smear, nor the slightest error in the figure.