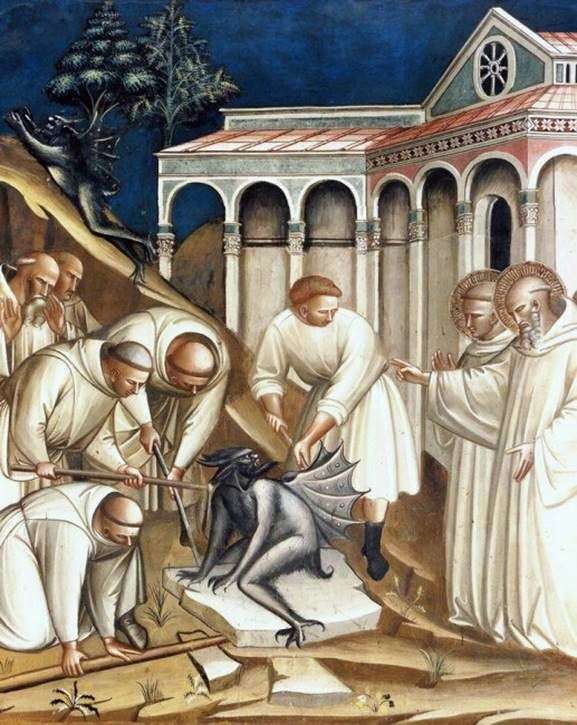 In 1387, Spinello Aretino wrote a series of frescoes on the theme of the life of St. Benedicta in the sacristy of the Church of San Miniato, located on the slope of the mountain above Florence. As the founder of the first large monastic order in the West, Benedict is often portrayed as the builder of men’s monasteries: for example, in the cycle of frescoes in the monastery on Mount Oliveto Maggiore, near Siena, this theme is treated in a more refined manner. Judging by the legends of St.. Benedict, retold in the Dialogues of St. Gregory the Great, he enjoyed great fame and veneration as a miracle worker and exorcist.

In the scene given here, Spinello Aretino portrayed an episode connected with the first of the constructed St. Benedict monasteries on Mount Cassino. Monks in white cassocks can not lift the stone slab they need to be built, because the devil is sitting on it. St. Benedict raises his hand to drive out the demon who, in fright, hastens to get out. SW. BENEDICT. Benedict was born in Umbria; having gone to Rome to study, he refused from the dissolute city life to become a hermit.

Around 529 he founded his order, the first in Europe, on Mount Cassino. His glory spread everywhere, and the leader of the Ostrogoth Tothila listened to his advice. St. Benedict was buried in a tomb with his sister St. Scholasticism. In addition, little is known about his life, but there are many legends. Here are some of them: Nanny Benedict followed with him to Rome, where she borrowed a sieve; when it fell apart, Benedict miraculously restored it. Being a hermit, he was fed by a monk who let him know that food was brought, pulling at the rope, to the other end of which was attached a bell.

Benedict asked the monks to lead a more strict life, which is why they tried to poison him: when Benedikt read the blessing over a glass containing poison, he broke into smithereens, as if from a stone blow. Maurius and Placid were two young men entrusted to his cares. When Placid fell into a stormy river, Benedikt did so that Mavri could save his friend by walking on the surface of the water and pulling him out of the river by the hair. The villain-villain tried to poison Benedict with a slice of bread, but the saint ordered the crow to fly away with the poisoned slice away, and the priest crushed the collapsed building.

Benedict threatened the two nuns with immediate excommunication from the Church if they did not stop gossiping. Not paying attention to this warning, a few days later they died and were buried in the church. At the Mass, the deacon ordered non-members of the Church to leave: and the two nuns rose from the graves and left the church. Benedict cast out demons from the possessed and healed the sick. Usually it is depicted as a gray-bearded old man. He can wear either the black cassock of the order to which he belonged at first, or the white cassock of the order he was reforming. Its attributes are a raven or crow, and also a broken tray.