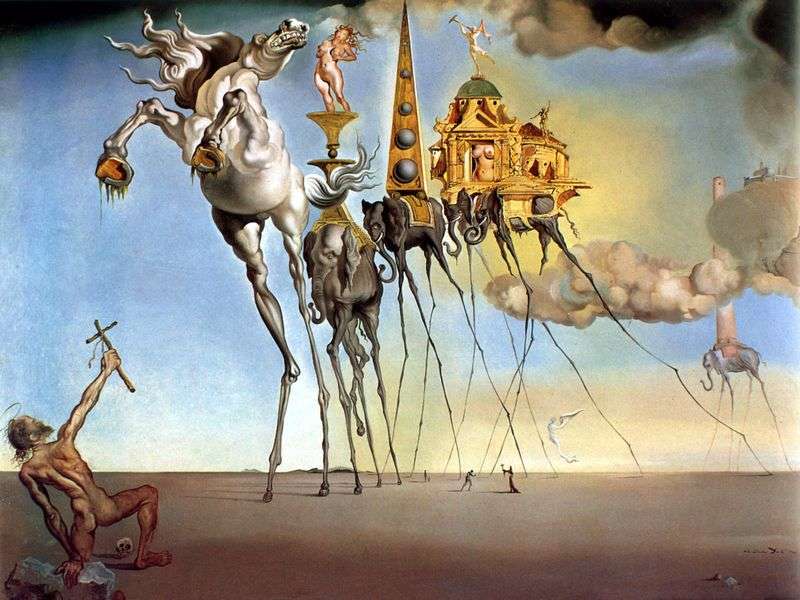 The picture of Salvador Dali “The Temptation of Saint Anthony” appeared thanks to the cinema. For the film “Dear Friend” it was required to draw an image of a saint who was subjected to various temptations. A lot of different artists took part in this competition, including the great surrealist Salvador Dali, but a certain emigrant artist from Europe won.

Saint Anthony is a real hermit who lived in the 4th century. According to legend, he was practically every night the demons torturing him, or the women who tried to seduce him.

The plot depicting the temptations of St. Anthony

was very popular in the Middle Ages; The second birth he experienced in the middle of the XX century. Salvador gave a rather original interpretation of this story, however, like many others.

Painting by Salvador Dali “The Temptation of Saint Anthony” seems to have an additional dimension between heaven and earth, long and thin legs of elephants are there. In the center of the composition, the artist depicted all the temptations tormenting the hermit, and he himself is in the lower left corner of the picture.

Temptations are depicted in allegorical form: the horse represents power, strength and pleasure, one of the elephants bears the Chalice of Desire on the back, the second – an obelisk, a symbol of power. In the background, the El Escorial is depicted – the symbol of the harmony of the soul and body, the spiritual and material principle – the goal of Antony.

This picture, according to the researchers of the work of Salvador Dali, was the beginning of a new direction in the artist’s work: in his works begins to manifest the synthesis of three elements: traditional painting, spiritualism and the spirit of a new era, the age of the atom.